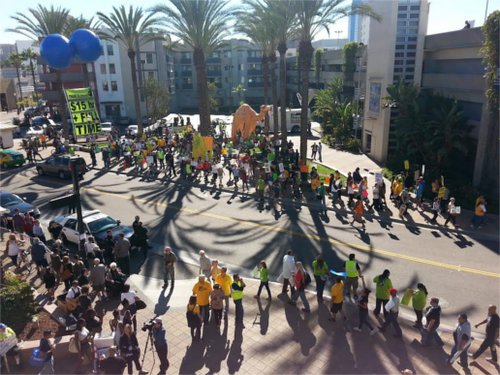 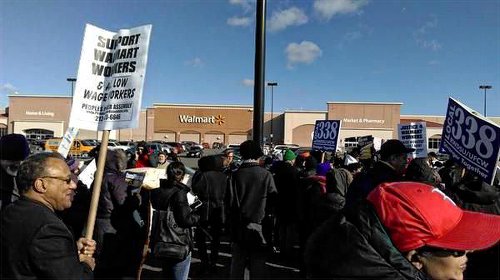 The fighting, angry spirit of the people of Ferguson, Mo., following the decision not to prosecute racist killer-cop Darren Wilson for the murder of Michael Brown seems to have carried into many of the more than 2,250 reported strikes at Walmart stores around the United States from Nov. 26 through Nov. 28, “Black Friday.”

Originally planned as a one-day strike at some 1,600 Walmart stores, the action turned into three days of sit-downs and other protests.

The Boycott Black Friday or #BlackoutBlackFriday movement in solidarity with Ferguson and against racism coincided with the largest strike yet against the giant retailer and its poverty wages. In several locations, the protests merged as participants rallied in solidarity with both struggles.

Forbes noted the united nature of some of the protests: “In Chicago, protesters marched from the Magnificent Mile shopping district to Wicker Park, with some of the group splitting off to go to a Walmart store on the West Side. The Black Friday boycott coincided with Walmart worker strikes in other cities and towns across the country, with Ferguson protesters in Boston, Washington, D.C., Los Angeles, Dallas, Denver and more allying with low-wage employees seeking better pay from the big-box giant.” (forbes.com, Nov. 29)

Organization United for Respect at Walmart, OUR Walmart, bolstered by the Food and Commercial Workers union, explained why “associates” were taking the bold step of walking off the job: “Income inequality is the highest it’s been since 1928. Corporate profits are at an all-time high. Meanwhile, wages are at the lowest point since 1948 — even as productivity increases.

“No one family is driving this trend quite like Walmart’s owners, the Waltons. The Walton family is the richest family in [the U.S.] with nearly $150 billion in wealth and as much money as 43 percent of [U.S.] families combined. And yet, most Walmart workers make less than just $25,000 a year. That’s why community members are joining their calls for increased wages and access to hours. …

“While Rob, Alice and the rest of the Waltons are by far the richest family in [the U.S.], many of the Walmart workers who helped to build that fortune are struggling just to get by. Workers at Walmart are looking for a fair shot, but the silver-spooned Walton family is robbing them of a decent living.” (forrespect.org)

Many workers face hunger and other deprivations as a result of trying to support themselves and their families on the meager wages and short, irregular work schedules at Walmart. A study found that many Walmart workers at an average super center rely on Supplemental Nutrition Assistance Program benefits (food stamps), Medicaid, subsidized housing and other types of assistance because their wages are so low. (democracts.edworkforce.house.gov)

OUR Walmart reported on Facebook the evening of Nov. 25: “Happening now: 1,000 people in Washington, D.C., march to Walmart drawing connections between the abuse of power in Ferguson and Walmart.”

Walmart workers in Virginia and Washington, D.C., went out on strike for the first time Nov. 26 and were joined by workers in cities and areas in California, Florida, Illinois, Louisiana, Maryland, Massachusetts, Minnesota, Oregon, Pennsylvania, Texas and Wisconsin. (popularresistance.org, Nov. 26) In Washington there were protests at all 64 stores in the state. (motherjones.com, Nov. 28)

According to the Nov. 28 New York Times, “About 300 people rallied Friday morning at a Walmart near Union Station in Washington, while 11 Walmart workers and supporters were arrested on charges of blocking traffic outside a Walmart on West Monroe Street in Chicago. At the Walmart in North Bergen, N.J., several hundred union members and others protested, including Randi Weingarten, president of the American Federation of Teachers.”

Around 100 protesters picketed the entrance to the Oakland, Calif., Walmart store for a couple of hours for “No Business As Usual Ferguson Solidarity Action Against Police Terror.” They included young people from the group Young Oakland, who led a lot of the chants, including “Walmart hires cops, know where you shop!” and “Black lives matter, Walmart workers matter!” Near the end of the protest, several die-ins were conducted, blocking the building’s entrances and exits, each for 4.5 minutes, symbolizing the four and a half hours Mike Brown’s body was left bleeding to death in the street by Ferguson police.

A leaflet was distributed to shoppers, describing how Walmart is the largest private employer of African Americans in the country, yet Black workers are the least likely to get promoted, make poverty wages and are assigned less than full-time hours.

‘From Ferguson to Walmart’

In the city of Long Beach, Calif., located in Los Angeles County, a strike action at Walmart attracted non-Walmart workers from all over Los Angeles in solidarity. Members of the LA Workers Assembly had a table and participated in the picket line with signs that read “Stand Up Against Injustice Everywhere — From Ferguson to Walmart.” Many participants also signed the petition for a $15 minimum wage.

The local Fight for $15 movement simultaneously targeted four Walmart stores in San Diego County  on “Black Friday.” Ignoring strong opposition in the historic Barrio Logan community close to downtown San Diego, Walmart went ahead and gutted the farmers’ market building on Imperial Avenue, where generations of Latinas/os had gathered to shop and socialize and replaced it with one of its stores.

Another action on Dec. 4 will target a McDonald’s in the multinational community of City Heights and continue with a downtown rally and march later in the day.

Workers and activists marched on a busy Atlanta corridor to a large Walmart store. Organized by Atlanta Jobs with Justice and the Atlanta Central Labor Council, the protesters marched into the store, chanting and blocking the doors. After a confrontation at the doors, the demonstrators backed out into the parking lot while the stand-off continued.

A significant section of the demonstration was from the #Black Lives Matter coalition. Members carried a long banner which was used to help block the store entrance. After about half an hour, the demonstrators moved out to the busy thoroughfare where they remained for several hours.

Hundreds demonstrated at a Walmart in a Detroit suburb at an action called by Jobs with Justice. Participants included a broad representation of union locals, religious leaders and low-wage workers, who delivered a letter to Walmart management demanding $15 an hour and full-time jobs for the workers.

Union members, including postal workers, stagehands and other workers, joined community activists to rally outside a Walmart in South Philadelphia. Several speakers pointed out that the workers demanding higher wages at Walmart come from the same communities fighting police brutality.

A protest in front of Philadelphia’s Gallery Mall was followed by a march that snaked through traffic in the Center City shopping district, with demonstrators urging people not to shop in outrage of the Ferguson grand jury decision.

The Baltimore Workers Assembly organized a demonstration for a $15-per-hour wage for Walmart workers at a Walmart outside the city. Protesters included a delegation from UFCW Local 27 and an African-American high school student group from Baltimore city.

Afterwards, the Workers Assembly agreed to assist the high school group that wanted to march to another mall for Black Friday 4 Michael Brown. As they were marching away from Walmart to the other location, the police roughed up and arrested a young woman demonstrator who was driving her car behind the youth. The police ran in front of her car to stop her,  opened the car door and dragged her from the vehicle, while protesters witnessed and videoed the incident.

The protesters regrouped and finished marching to Towson Town Mall for the Hands Up Don’t Shoot protest in solidarity with Ferguson.

The Baltimore Workers Assembly raised funds to cover the woman’s $10,000 bond, and is now organizing support for this victim of police brutality who is facing frame-up charges of second degree assault on the cops.

In New York City, a strong Walmart protest was held in Times Square. Afterwards demonstrators stood up for the workers at the Guitar Center, who are struggling for a fair contract that provides a living wage, affordable benefits and respect.