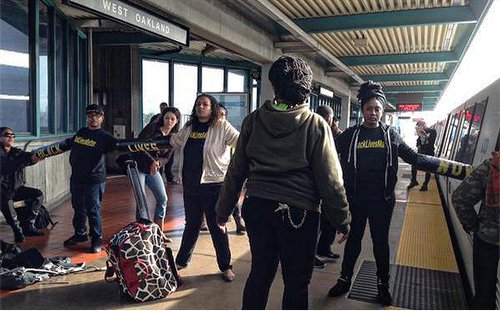 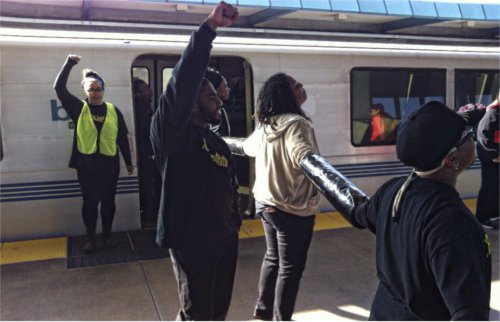 Cat Brooks, one of the arrestees in the BlackOut Collective’s civil disobedience action, which shut down transbay traffic at the West Oakland Bay Area Rapid Transit station for most of the day on BlackOut Friday, spoke that same day to Terri Kay of Workers World. The demonstrators had chained themselves to two trains, one in each direction, and then to benches on the platforms, to keep the trains from moving. Meanwhile, a support rally was held outside the station on the ground floor.

Brooks is co-chair of Organizing to Act Never Ceasing to Struggle Youth Focused with Elder Guidance Xercising the Right to Liberate our Communities (ONYX) Organizing Committee.

Cat Brooks: We did the action to raise awareness about the outrage across the country at the non-indictment of Darren Wilson for the execution of Mike Brown. It’s not just for Mike Brown that we stood yesterday, though. There was a national call to “Black Out Black Friday” and do an economic boycott of the system that continues to terrorize and kill us.

In addition to our direct shutdown, there was a healing ceremony participated in by hundreds of Black people in Oakland in the downstairs BART station because our community has been so tortured, so tormented, so pillaged and raped and abused and beaten and battered by the system and by the state, that in our struggle we also have to take time to heal ourselves and uplift ourselves to continue the battle.

WW: Who organized this and how did you go about it?

CB: We joined an amazing powerhouse group called the BlackOut Collective, which is a full service direct action team for Black folks. It was an amazing coming together of elders, that have been in the movement a long time, and some veterans like myself that have been in for less time, and some young folks who have been activated around Mike Brown. It was quite beautiful, on the side of the platform I was chained to we had age ranges from the late 50s all the way down to your 20s.

WW: How long were you able to shut the system down for?

CB: We were chained in for a little over two hours, but if you watch the news reports the service did not get back to normal until around 7 p.m. that night, so we locked in at 10 a.m. and we successfully interrupted business as usual for over 7 hours.

WW: There were some arrests. Is everyone out?

CB: Fourteen of us were arrested. Everyone was out by 6 p.m. We have been charged with trespassing on a railway.

WW: What are the results of this action?

CB: There is national attention on this action. What I’m seeing is dialogue sparked over social media. That dialogue is translating into households. It was also a power moment. We were able to demonstrate that North American Africans can organize, can be highly organized, can be highly disciplined, can be highly strategic and can impact the system. What I think we’ll see is more actions like this. I know that the group of us plan to continue going. It renewed energy into the struggle.

It also interrupted business as usual. You do not get to continue business as usual when part of that business as usual is the execution of Black and Brown men on the streets by state terrorism. It stops now! What you are seeing is multi generations of people who are really, really fed up, and Ferguson has been the jumping off point for what I believe is going to be sustained direct action and otherwise until there’s a change, until there’s a cease and desist of the war on Black people in this country. 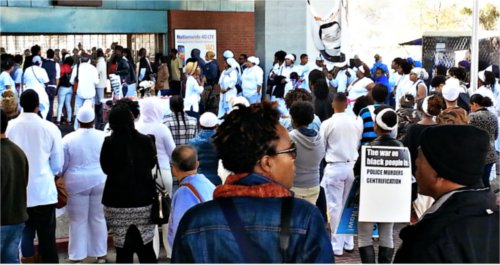