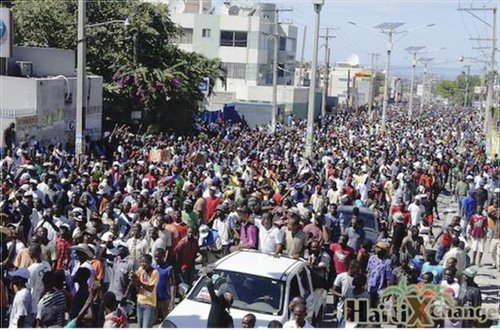 November 18 is the anniversary of the 1803 battle of Vertière, the decisive battle of the Haitian revolution in which an army of former slaves — most born in Africa — defeated the cream of the French army and guaranteed Haiti’s independence.

On that anniversary this year, tens of thousands of Haitians took the opportunity to come out into the streets of Port-au-Prince and other big Haitian cities, including Aux Cayes, Jérémie, Petit-Goâve, Cap-Haïtien and Jacmel, to demand the government of President Michel Martelly and Prime Minister Laurent Lamothe resign.

The protesters accused the government of being corrupt and repressive and not working for the people’s needs. For example, the government has raised the price of gasoline, a basic necessity, even though its world price is falling sharply.

The march in Port-au-Prince stepped off at 10 a.m. and headed through the northern suburbs toward the National Palace. After an incident in which rocks were thrown at some of the more prominent marchers, someone fired shots from a vehicle with government license plates. There was some confusion over who fired the shots — Haitian cops, National Palace security or hired-for-the-event gangsters. (Haïti Liberté, Nov. 21)

Even though he knows justice will never be served under Martelly, Senator Moïse Jean-Charles announced to HPN Nov. 21 that he was going to file a formal complaint against the current administration for allowing an armed attack on a constitutionally protected activity,

The shots killed two men. Their bodies were removed; one of the dead was tentatively identified later. Five were injured, according to AlterPresse Service. While the killings broke up the demonstration, the coalition that called it announced three new marches on Nov. 25, 28 and 29.

It is becoming clearer and clearer that President Martelly is maneuvering to rule by decree after the parliament is dissolved Jan. 12, 2015, when the mandates of a third of the senators and all of the deputies expire.

Kiko St. Rémy, Martelly’s brother-in-law, joined the marchers in the capital on Nov. 18. St. Rémy demanded the resignation of Prime Minister Lamothe, because Lamothe is corrupt and unjustly ordered the arrest of demonstrators in the past month.

Lamothe is a U.S.-trained entrepreneur who has built up a major cell phone business in the Carribean, and is openly scheming to become the next Haitian president. St. Rémi is from Gonaïve and is part of the big-landlord faction of the Haitian bourgeoisie.

The Haitian people despise both.

Given the evident upswelling of anger among the Haitian people, the U.S. government, which has remained remarkably silent about the bloody violations of human rights in Haiti, will face a choice of supporting Martelly or Lamothe. The last thing that suits U.S. imperialist domination of Haiti is another massive, popular rejection of the current order there.