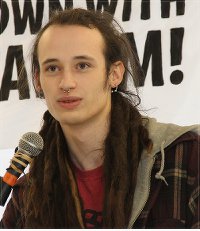 Talk by Tommy Cavanaugh at the 2014 National Conference of Workers World Party in New York on Nov. 15.

It really is an honor to address this conference as a McDonald’s worker and striker. Instead of the self-blame and lack of dignity the bosses and bourgeois media try to instill in us, I stand proud as a fast-food worker and owe this in great part to the thousands of other fast-food and low-wage workers who have risked what meager income they have by fighting back against exploitation. These workers have also started to show the path of struggle for the entire working-class movement.

It has now been two years since the fast-food strikes began and the “$15 an hour and a union” slogan was firmly raised, starting here in New York. Since then, there have been countless demonstrations, seven strikes nationally and some internationally, with more to come. Hundreds of workers and supporters shut down McDonald’s headquarters in May of this year. Mass meetings have involved thousands of McDonald’s and other low-wage workers all over the country.

Some workers, like myself, have participated in civil disobedience and taken arrests, showing that we are serious when we say we will do whatever it takes to win. Though slow to emerge, there has also been the start of cooperation with other low-wage workers, like those at Wal-Mart, who have also been fighting the bosses to organize.

The steady growth of the fast-food workers’ movement has forced a serious discussion in the corporate media and the recognition by bourgeois politicians that it is a force they need to navigate. So much so that President Obama has commented on the issue in two consecutive State of the Union addresses. On Labor Day he gave words — and only words — of support for our struggle for the right to a union.

Beyond winning recognition as an emerging political force, we have also won some city- and state-level victories to raise the minimum wage over the coming years and national victories in the courts against McDonald’s.

Instead of contract negotiations, electioneering or similar tactics, which tend to pull the workers out of the debate and leadership roles, the strike has emerged as the main tool in our fight.

Without recognized unions, avenues for collective bargaining or discussion with management, the workers were left with few other paths of struggle. This has exposed a whole new section of workers, previously inexperienced with any sort of union activity, to the strongest weapon we have: the withholding of our labor power from the bosses.

While still mostly symbolic in character, the strikes have captured national attention, particularly the attention of other low-wage workers, and have temporarily shut down certain locations.

The participation in civil disobedience has been a sign that workers are willing to escalate the struggle and go outside the limits of bourgeois legality. It’s the role of communists to develop this beyond symbolic acts, displaying our dedication as a force that is independent of bourgeois parties and able to confront the state.

Labor organizations and lawyers have protected fast-food strikers, allowing us to return to work, and there’s growing support in the communities. A recent Pew Research Center poll showed that over 70 percent of those questioned supported increasing the minimum wage. This means workers should grow even bolder and so should the left’s solidarity and agitation.

Some question whether socialist agitation and consciousness among fast-food workers is possible. But if not fast-food and other low-wage workers, where else? Capitalism has placed side-by-side some of the most oppressed and exploited segments of the population, who are most in need of a revolutionary change towards socialism. They participate in an international web of production in which millions of workers all around the world are under common bosses who reap billions from their labor.

This emerging movement of fast-food workers has great potential. It has shown what can happen when organized labor puts even small amounts of resources into it.

Look at how fast this movement has been advancing. We are by no means at a decisive point of victory, but just a few years ago the workers and much of the left did not expect the slogan of $15 an hour and a union to take such a hold in the national discussion. The conditions are there for it. Even some liberal sections of the bourgeoisie have been forced to recognize this.

But raising the minimum wage in certain localities is not enough. Linking up with other sections of low-wage workers is necessary to advance the $15-an-hour fight.

And building greater classwide solidarity is the basis of socialist organizing. In this period of capitalism at a dead end, with unprecedented attacks on all fronts, it is our only option to build a fighting movement capable of tearing down this disgusting profit-driven sy