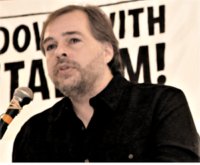 A year ago, few people in the U.S. — including us — were thinking about Ukraine. But one group was: the imperialist ruling class. The 1% and their Pentagon enforcers had been not only thinking about the former Soviet republic, but pouring in money — to the tune of $5 billion, by their own admission — to foment a coup and open up the possibility of NATO expansion to Russia’s western border.

Last November, a movement protesting Kiev’s government began in Maidan Square in Kiev, Ukraine’s capital. The Western media and U.S. officials loudly supported it, the first indication that something was amiss. These protests, allegedly for democracy and against corruption, demanded an association agreement with the European Union that would open Ukraine’s markets to the West while cutting economic ties with Russia and its Customs Union.

The neoliberal character of the movement was clear. In December, its fascist component took center stage as demonstrators destroyed monuments to V.I. Lenin and the Soviet Red Army. Republican Sen. John McCain flew to Kiev and stood beside Oleh Tyahnybok, an open neo-Nazi.

Last February, the elected bourgeois government was toppled. Oligarchs assumed direct control of the state and neo-Nazi gangs terrorized the streets. The Obama administration immediately pledged $10 billion in assistance to the new regime and sent John Kerry to hand over the first billion personally.

It seemed that Washington had successfully carried out another so-called color revolution — actually a counterrevolution.

But then something unexpected happened. An anti-fascist rebellion rooted in the working class began in eastern Ukraine. What started as a protest by the region’s mostly Russian-speaking population against the new regime’s ban on the Russian language developed into a full-fledged armed struggle against NATO expansion, austerity and neo-Nazi terror.

What’s more, it took place in a former Soviet republic shattered by capitalist counterrevolution only a generation ago. For the first time in 20 years, discussion of genuine revolution — workers’ revolution for socialism — was back on the agenda in the newly proclaimed People’s Republics of Donetsk and Lugansk, as well as other areas of Eastern Ukraine still occupied by the Kiev regime.

The shock waves of this rebellion in the industrial and mining region of Donbass were felt throughout the Russian Federation and the former Soviet Union. A resurgence of Soviet patriotism and anti-fascist sentiment pushed the bourgeois government in Moscow to stand up for the existence of the people’s republics, in however flawed and contradictory ways.

The effects continue to ripple outward across Europe, where the remembrance of Nazism and fascist occupation remains deeply rooted in the working class. And from the anti-fascist movement in Spain it has spread to Latin America as well. Today, young leftists from Russia, China, Greece, Spain and Brazil, inspired by the international brigades of the Spanish Civil War, have joined the people’s militias fighting fascism in the Donbass.

While the resistance is inspiring, the toll of the U.S.-backed coup in Ukraine is enormous. Over 10,000 have been killed in the regime’s so-called anti-terrorist operation, tens of thousands more wounded, hundreds of thousands made refugees, homes, schools, hospitals and factories destroyed. At least 48 anti-fascists were slaughtered in the neo-Nazi siege of the Odessa House of Trade Unions building last May 2, hundreds more imprisoned or driven into exile.

The constant ratcheting up of war propaganda by the U.S. and NATO against Russia threatens to tip the world into a new global conflict as Wall Street pursues one of its major strategic goals: the destruction of Russia as an independent capitalist rival outside of U.S. control.

This week, we’ve seen another major escalation in U.S./NATO war rhetoric as Kiev prepares for a new military offensive against Donbass. The coming months will likely see an increasing class struggle unfold within the people’s republics over their future direction — whether into the orbit of capitalist Russia or in the direction of revolutionary socialism.

Workers World Party stands firmly in solidarity with the Donbass People’s Republics and the anti-fascist resistance in Ukraine. We demand an end to the repression against Union Borotba, the Communist Party of Ukraine, and other popular organizations and workers’ movements targeted by the coup regime and its neo-Nazi enforcers.

Together with our allies in the International Action Center and the United National Antiwar Coalition, we will continue our work to educate the anti-war and workers’ movement and take action to demand: No NATO expansion! Hands off Donbass and Russia! U.S. out of Ukraine!