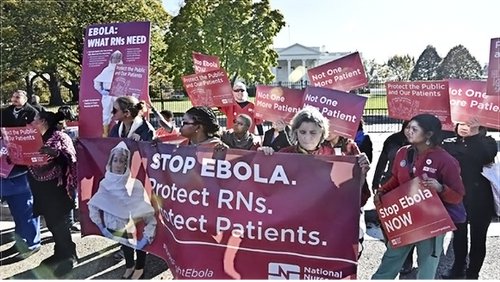 Nurses at White House during national strike for health and safety.

National Nurses United held a day of strikes and demonstrations in 16 states on Nov. 12 demanding effective personal protective equipment and “continuous, rigorous interactive training for RNs and other health workers who might ­encounter an Ebola patient,” said Rose Ann DeMoro, NNU executive director. “That includes practice putting on and taking off the hazmat suits where some of the greatest risk of infection can ­occur. The lack of concern for nurses and ­patients in a world where corporations have taken over our community health care has been magnified during this deadly Ebola crisis.”

In the African countries of Guinea, Liberia and Sierra Leone, Ebola kills at least half the people who contract the disease, according to a World Health Organization fact sheet. In the United States, as of Nov. 16, eight out of 10 Ebola patients have recovered. Survivors received early diagnosis and supportive care: prevention of dehydration with intravenous fluids, replacement of blood components, oxygen, nutritional support, and treatment for hemorrhage, shock and co-existing bacterial infections.

It is unknown whether blood plasma from survivors, which in theory contains antibodies to fight the virus, or the drug Zmapp, played a role in their recovery. These have not yet been tested in human beings to determine their safety or effectiveness.

Thomas Eric Duncan is the only Ebola patient treated in the U.S. to have died. An uninsured Liberian man, he was turned away from a Dallas hospital on Sept. 26 after a CAT scan, despite having fever and a history of travel to an area with much Ebola. He did not receive any treatment until several days later, when he returned by ambulance, critically ill. Two nurses at the nonunion hospital were infected with Ebola while caring for Duncan without proper training. They have recovered.

It appears that basic supportive care can greatly reduce the Ebola death toll. However, since the 1980s, the International Monetary Fund has enforced policies that led to a deterioration of health care infrastructure in countries now hit by the disease.

According to Rick Rowden in the Oct. 30 issue of Foreign Policy magazine, IMF policies that prevent “developing countries from scaling up long-term public investment in public health systems … have led to dilapidated health infrastructure, inadequate numbers of health personnel and demoralizing working conditions that have added to the ‘push factors’ driving the migration of nurses from poor countries to rich ones. All this has undermined public health systems in developing countries, including the ones now trying to cope with Ebola.”