Workers World reprints this Nov. 14 article by Wica Agli, of the Rosebud Sioux Tribe, published by the Earth First! Newswire. Since then the Keystone XL pipeline was narrowly turned down in the Senate on Nov. 18, but is expected to pass in January with the new Congress. 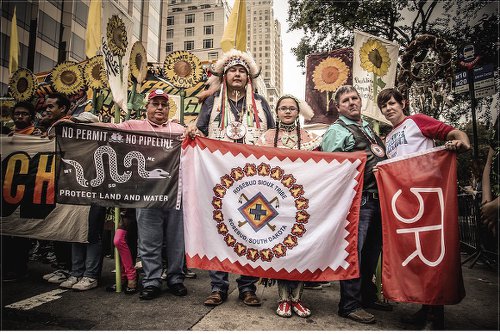 The tribe has done its part to remain peaceful in its dealing with the United States in this matter, in spite of the fact that the Rosebud Sioux Tribe has yet to be properly consulted on the project, which would cross through tribal land, and the concerns brought to the Department of Interior and to the Department of State have yet to be addressed.

“The House has now signed our death warrants and the death warrants of our children and grandchildren. The Rosebud Sioux Tribe will not allow this pipeline through our lands,” said President [Cyril] Scott of the Rosebud Sioux Tribe. “We are outraged at the lack of intergovernmental cooperation. We are a sovereign nation and we are not being treated as such. We will close our reservation borders to Keystone XL. Authorizing Keystone XL is an act of war against our people.”

In February of this year, the Rosebud Sioux Tribe and other members of the Great Sioux Nation adopted tribal resolutions opposing the Keystone XL project.

“The Lakota people have always been stewards of this land,” added President Scott. “We feel it is imperative that we provide safe and responsible alternative energy resources not only to tribal members but to non-tribal members as well. We need to stop focusing and investing in risky fossil fuel projects like TransCanada’s Keystone XL pipeline. We need to start remembering that the earth is our mother and stop polluting her and start taking steps to preserve the land, water, and our grandchildren’s future.”

The Rosebud Sioux Tribe, along with several other South Dakota Tribes, stand together in opposition to risky and dangerous fossil fuel projects like TransCanada’s Keystone XL. The proposed route of TransCanada’s Keystone XL pipeline crosses directly through Great Sioux Nation (Oceti Sakowin) Treaty lands as defined by both the 1851 and 1868 Fort Laramie Treaties and within the current exterior boundaries of the Rosebud Sioux Reservation and Cheyenne River Sioux Reservation.