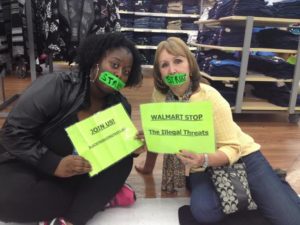 Walmart workers carried out their first ever sit-down strikes at two different stores in Los Angeles on Nov. 13.

After sitting down inside the store at Pico Rivera, workers marched outside, sat down in a busy intersection and refused to leave. Police struggled to free up the intersection and keep traffic and Walmart profits flowing, but were only able to break up the action after 23 protesters had been arrested.

The strike was part of an ongoing campaign by the workers’ organization called OUR Walmart to fight for higher pay and stop the company’s retaliation against workers who speak out and try to organize.

Intimidation and retaliation are favored anti-union tactics of the giant retail chain. This was the first Walmart workers’ sit-down strike, but OUR Walmart, with assistance from the Food and Commercial Workers union, has carried out a series of spirited actions for months.

During October protests, 26 were arrested at the New York home of Alice Walton and another 16 were arrested at a protest in Washington, D.C. On the same day, hundreds gathered to protest in front of Rob Walton’s posh residence in Phoenix. Other recent actions included a 75-mile walk from a giant Walmart warehouse to Los Angeles, which garnered a good deal of press attention.

The Walton family controls more wealth than the bottom 40 percent of the entire U.S. population. That money comes from the exploitation of the Walmart workers, who are paid so little that many live below the federal poverty line and can only survive on food stamps and other social services. The hours they are allowed to work are limited so that Walmart can pay them less and provide few benefits. Many Walmart staff sleep in their cars in the parking lots of the stores where they work, so that, if they’re called on, they can work extra hours without having to commute.

Workers World spoke with Daniel Coles, a Walmart worker who is also an OUR Walmart organizer and who participated in the action at the Crenshaw store, located in South Central Los Angeles.

WW: You participated in one of the sit-down actions called by OUR Walmart on Thursday. Can you describe what happened?

Daniel Coles: Yes, I did! I was in the one at Crenshaw. At first, none of us who were going to be in it knew which stores we were going to. When I was first told I was going to Crenshaw, I was so happy, because that’s the store where I work. I knew that customers would know us and support us.

We used the Walmart slogan, which is “Save money, live better,” except we changed it to say “Stand up, live better.” So at first we chanted that, and then when we were ready to do the actual sit-down, we changed it to “Sit down, live better.” Then we put tape on our mouths with “Strike” written on it to symbolize that Walmart tries to silence us. The action lasted about two hours. At my store, just like I thought, we had a lot of customer support.  People told us that they agreed with us.

It was live streamed so a lot of people saw it. The analysts saw it in Arkansas. They had a meeting scheduled. We wanted them to see what was really happening at Walmart.

WW: Who are the analysts?

Coles: They’re a group of investors really, who analyze information about the different stores to see if everything is going well, so they know the stores are going smoothly and making money.

WW: Is it usually managers who give them the information?

Coles: Usually CFOs. But we wanted them to see what’s really happening. Their meeting was set for 10 o’clock in Arkansas so we got started about 15 minutes before and we know they saw it.

WW: So these actions were set up for that reason?  They were timed so that the investors would be confronted with the actions during their meeting?

Coles: Yes, that was the plan from the beginning.

WW: What were the specific demands?

Coles: We were demanding $15 an hour, full-time hours, and that Walmart management stop retaliating against us for our efforts to get a living wage.

WW: What was management’s reaction? Did they try to stop you or try to make you leave?

Coles: They were really surprised because they had no idea this was happening. At the Crenshaw store the manager called his boss, but they must have decided not to try to make us leave because we weren’t blocking customers and we had a lot of customer support in that store. A lot of people told us they agreed and supported us.

WW: What was the mood of you and your fellow workers at the end? Did you feel it was successful?

Coles: Everyone was really happy and proud, telling each other, “I’m really glad we did this.” “We did good work,” and things like that. We’re all looking forward to another strike on Black Friday, which is going to be even better.