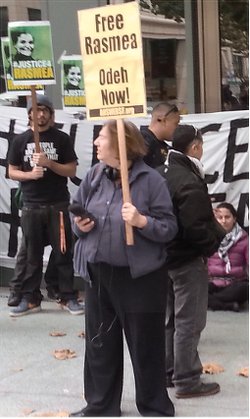 Outraged by the guilty verdict and immediate jailing of 67-year-old Palestinian activist Rasmea Odeh on Nov. 10, her supporters rallied and vowed to continue with their protests until she is released. Two days later, a group chained themselves to the doors of the Federal Courthouse at the Ron Dellums Federal Building in downtown Oakland.

In addition to those who chained themselves, many others banged and drummed on the doors with their fists, demanding Rasmea’s freedom. After several hours, fire fighters were brought in to cut the chains and locks and five people were arrested. They were later cited and released.

“The targeting of Rasmea is purely to criminalize Palestinians who are outspoken and critical of Israel’s oppression and occupation of Palestine,” says Lara Kiswani, executive director of the Arab Resource and Organizing Center.

In a statement, the AROC explained that “Odeh is the founder of the Arab Women’s Committee in Chicago, a grassroots collective that offers an environment that promotes leadership among Arab immigrant women. The U.S. government has accused her of omitting an answer on her citizenship application 10 years ago. Odeh, who was sexually tortured into a false confession by Israel and served a decade in Israeli prisons, faces revocation of her citizenship, imprisonment, and deportation.”

A letter of protest by more than 100 feminist scholars adds: “Rasmea’s story encompasses some of the most urgent feminist struggles of our times — violence against women and the use of sexual violence as a tool of colonization and war; the impact of racism and anti-immigrant policies upon women; the criminalization of women of color; and the use of intimidation to thwart feminist activism.”