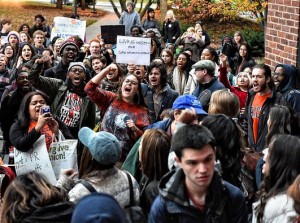 ‘Education is a right, not just for the rich and white,’ say student activists at Syracuse U.

Syracuse, N.Y. — Chanting “Education is a right, not just for the rich and white!” students marched on the administration headquarters of Syracuse University on Nov. 3. At first denied entrance to the locked-down building, protesters who had gotten inside earlier opened a door and students poured in. (syracuse.com)

The multinational, multigender march followed a rally for Diversity and Transparency (D.A.T.) of over 200 students, teachers, staff and community people. Students demanded that the administration of newly appointed Chancellor Kent Syverud commit to an ongoing program of support for “students of various socioeconomic class, disability, ethnicity, nationality, gender, sexuality and race experience on a day-to-day basis” on the campus. (#DatMovementSU)

Hanging a huge banner that read, “Is this a corporation or a school?” from a stairwell, about 40 students occupied the building. They said they were prepared to sit in until their demands were heard and negotiated to their satisfaction.

A ‘united front’ of students

The action was organized by “The General Body,” a self-described “united front of student organizations” at SU.

Representatives and leaders of over 50 student groups formed The General Body and compiled a comprehensive set of demands.

The rally culminated two months of demonstrations and marches against cutbacks and closures of programs at SU. Student-led protests, joined by faculty and staff, began in the summer with organizing against Syverud’s shutdown of the Advocacy Center. The center provided services to women and other people who had been the targets of rape, sexual harassment and/or violence in personal relationships.

Other protests included an NAACP-sponsored march in memory of Mike Brown, the African-American teenager gunned down by police last August in Ferguson, Mo., and a speakout against homophobic and racist language and aggressions on campus.

Another march challenged administration cuts in the Posse program, a recruitment effort that brought poor and working-class students from urban areas to the campus.

The occupying students insist that there be “No decision about us, without us” and specifically protest the chancellor’s Fast Forward initiative. That plan deletes the phrases “public good,” “diverse backgrounds” and “access to opportunity” from the school’s mission statement.

The students see this as a signal of intent to corporatize and limit access to education at the university.

SU has strong corporate and organizational ties with the banking industry and the military-industrial complex. CEO Jamie Dimon of JP MorganChase was the school’s 2010 commencement speaker. National Securities Studies at SU’s Maxwell School offers “executive education courses” for civilians and military personnel who are “responsible for national security interests.”

Pilotless Reaper drones, guided by National Guard pilots working out of Hancock Air Base in Syracuse, drop 500-pound “Hellfire” bombs on people in Pakistan and Afghanistan.

The chair of the U.S. Joint Chiefs of Staff, Gen. Martin Dempsey, spoke at SU’s Law School on Oct. 31. During discussion, he made an anti-Islamic comment about someone who had asked him a question.

Professor Linda Carty of the African American Studies program stated the administration’s cuts were “profoundly racist and classist. … The intent is to build a white upper-class university.” (jerkmagazine.net, Nov. 4)

Other speakers led the crowd in chants of “The people united will never be defeated!” and “Ain’t no power like the power of the people!”

As of the afternoon of Nov. 5, students continued to occupy SU’s administration building.

—Minnie Bruce Pratt is a teacher on contract at Syracuse University. For more information and Twitter sources see thegeneralbody.org.