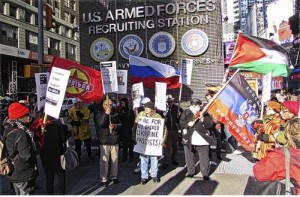 A sudden cold snap and whipping winds couldn’t keep fired-up activists from protesting at the U.S. military recruitment center in Times Square on Nov. 2 to demand, “U.S. out of Ukraine!”

They came to remember the anti-fascists massacred by neo-Nazis at Odessa’s House of Trade Unions six months before, and to stand in solidarity with the Donbass People’s Republics of Donetsk and Lugansk on the day of their first elections since declaring independence from Ukraine.

Protesters called for an independent investigation of the Odessa massacre, an immediate halt to direct and indirect U.S. aid to the Kiev government of oligarchs and neo-Nazis, and an end to NATO expansion aimed at destabilizing Russia.

Officially, 48 people are said to have died on May 2, when fascist gangs bused into the multinational port city of Odessa attacked a protest camp set up by opponents of the U.S.-backed coup in Kiev. Armed neo-Nazis chased activists into the House of Trade Unions, and then set the building on fire. They shot people through the windows and beat to death others trying to flee the inferno.

Odessa anti-fascists believe that many more died than the official tally.

Echoing the chants of courageous mourners who earlier that day broke through police lines to reach the site of the tragedy in Odessa, the Times Square protesters chanted, “Odessa, Donbass, we are with you!”

Despite the sharp winds, passersby took leaflets and many stopped to listen to speakers.

Greg Butterfield, coordinator of the Ukraine Antifascist Solidarity Committee of the International Action Center, said: “We demand to know what the U.S. role was in the Odessa massacre. Both Democrats and Republicans in Washington have been deeply involved in every aspect of the far-right coup in Ukraine and the war against the people of Novorossiya,” as the union of the people’s republics is known.

“Just like in Ferguson after the police murder of Mike Brown, in Odessa the guilty have been protected while the survivors of the massacre are repressed,” Butterfield said.

“After Congress and President Obama agreed to cut almost $10 billion in food assistance to hungry families here, the U.S. turned around and pledged $10 billion in loans to the junta in Ukraine. There is a direct correlation between U.S. imperialist attacks on the people at home and abroad,” he said.

The commemoration in Times Square was a truly international event, with activist-immigrants from Central America, Iran, Pakistan, Ukraine, Russia and Belarus rallying alongside those born in the U.S. Many held signs with photos of youths who died in Odessa and other recent young victims of U.S.-backed fascism and bigotry, like Robert Serra, a Venezuelan socialist leader, and Jennifer Laude, a transgender Filipina.

At the end of the rally, the names of the known Odessa victims were read out. After a moment of silence, black balloons were released in honor of the anti-fascists who fell on May 2.