Workers World: What was Borotba’s view of the Maidan movement that overthrew President Victor Yanukovych in February? Washington and the corporate media told U.S. workers that it was a great democratic movement facing repression from a tyrannical dictator. [Maidan took its name from the central square of Kiev, the Ukrainian capital, where it held protests in late 2013 and early 2014. — WW] 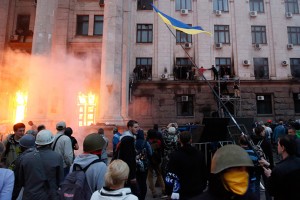 Victor Shapinov: Before the Maidan coup, Ukraine was a country without a significant army. Ukraine did not have any real enemies around, so our ruling class only established a police apparatus. The army was something that issued decrees and was used for corruption. Ukrainian military pilots didn’t even have enough hours in the sky to really be pilots.

But afterward, when the Maidan forces came to power, we saw a very fast militarization of all aspects of social life.

Even when Yanukovych was still in power, we knew they had firearms and bombs on Maidan Square. Everybody knew it. But Yanukovych feared the Western powers. They warned him that if he used police against the Maidan, he would be attacked and eliminated like [former Libyan leader Col. Muammar] Gadhafi. He was afraid, and as a result he lost everything.

Of course, we are not upset that Yanukovych disappeared. But you can see the influence of imperialism, its magnetic pull. You may have everything at your command — secret service, police — but you can’t use them if Western imperialism says, “Don’t do it.”

The core of Maidan was formed by paramilitary gangs, most of them with neo-Nazi or radical nationalist ideology. Some of them were called “Maidan Self-Defense.”

Another component was the “Golden Youth” — wealthy and middle-class young men who drive luxury cars and carry firearms. They hate the people accused of supporting Yanukovych, because, according to them, they are poor and stupid, human livestock. To them, politics should only be for businessmen.

These two ideological trends merged on the Maidan and developed a common enemy: the people of Donbass [the mining and industrial region of southeastern Ukraine].

They consider Donbass people bad because many of them are Russian speakers, and some of them are pro-Russian. This makes them the enemy of the fascist, nationalistic part of Maidan.

Donbass people are poor, most of them are miners and workers, and this makes them the enemy of the Golden Youth. They say the working classes are second-class people who should not vote or have political influence.

So it was not only a national question or language question, it was also a social and class question. They had not only Russophobic ideas, but also a kind of class racism against the Donbass “cattle.” The Polish aristocracy used this term for the peasants, and now the Maidan uses it for the people of Donbass.

WW: What did these groups do after Yanukovych’s overthrow?

VS: After the coup, they formed military brigades, paramilitary groups and started to hold demonstrations against political opponents.

Borotba was face to face with it. We were one of the first groups targeted. They came to our office right after the Maidan victory.

They wanted to kill us. They have the slogan, “Communists to the tree branch,” meaning communists should be hanged. It comes from the Bandera movement [pro-fascists who fought against the Soviet Red Army during the World War II Nazi occupation].

So we evacuated our comrades. When the fascists arrived at our office, they found only empty walls. All they could do was cut up some posters with knives.

In this situation, we could not continue our political activity in Kiev. We moved to Kharkov [Ukraine’s second-largest city, located in the southeast]. Odessa and Kharkov became the most important centers of our organization during the AntiMaidan movement.

The nationalists and oligarchs sent their paramilitary gangs to the southeast. They called them “Trains of Friendship.” It was very cynical, because they wanted to beat up their opponents. They said, “We will teach you to love Ukraine.”

First, they went to Donetsk, but the people there fought back and they lost. After that, the first People’s Militias were formed in response.

Before that the resistance in Donetsk was peaceful. Of course there were some people with rifles, because there had also been people on Maidan with rifles, but it was not a militarized movement. They held rallies, like Maidan, but in the other political direction.

The paramilitaries also came to Kharkov and there were some fights. In one battle, two comrades from the Kharkov self-defense squad were killed by the fascists. It was a completely neo-Nazi outfit named “Misanthropic Division.” They made videos of themselves where they said, “We don’t fear death, because we will meet the Führer [Adolf Hitler, dictator of Nazi Germany from 1934 to 1945] in Valhalla.”

The high point of these clashes was on May 2 in Odessa. The fascists were very organized, they had several thousand paramilitary people, and they massacred protesters from Kulikovo Field who were against Maidan.

After Kiev launched its war in Donbass, many of these people joined the so-called territorial battalions. These are paramilitary groups armed by the state with firearms and artillery, but not within the structure of the official Ukrainian military, and not subordinated to the minister of Internal Affairs. Sometimes they are just private gangs, like the paramilitaries directly armed by the oligarch Igor Kolomoisky.

This situation does not exactly resemble classical German or Italian fascism. It’s more like the pro-fascist paramilitary movements of the 1970s and 1980s in Latin America. The oligarchs create paramilitary groups and use them to spread terror.

Even Amnesty International, which is supported by U.S. imperialism, published a report of military crimes by one of these groups, the Adar Battalion, which is guilty of marauding, looting, torturing and killing people in Donbass.

Next: Oligarchs and austerity