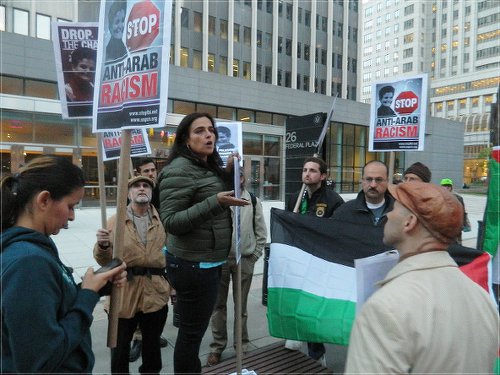 Workers World received a statement from the Rasmea Defense Committee, which we publish here:

Judge Gershwin Drain handed down a series of outrageous and unjust decisions, Oct 27–28, in the case of revered Palestinian American leader Rasmea Odeh. The government is going all out to railroad Rasmea to jail and deport her. There was nothing fair about her being indicted on trumped up immigration charges in the first place. The recent rulings by Judge Drain indicate that there will be nothing fair about Rasmea’s trial either.

Determined and collective action by those of us who yearn for justice, and civil and human rights, is imperative. We must fill the streets around the courthouse in Detroit, pack the courtroom during the trial and organize demonstrations around the country.  If there is to be a measure of justice in this case, we are the ones who must provide it.

In the late 1960s, Rasmea Odeh was jailed by the Israeli occupiers of Palestine, where she was tortured and raped. She has spent the past 20 years in the U.S., making huge contributions to not only the Arab community of Chicagoland, but also the immigrant rights, racial justice, women’s rights and many other movements. She is being victimized for a second time in Detroit.

Judge Drain agreed that Rasmea’s assertion that she faced torture and sexual abuse at the hands of her Israeli captors is “credible,” and then contradicted himself and ruled it cannot be brought up in the course of her trial — even though this was at the heart of her defense. Her attorneys had planned to call an expert witness to the stand, but now will not be allowed to. Clinical psychologist Dr. Mary Fabri, who has decades of experience working with torture survivors, would have testified that an error Rasmea allegedly made in filling out immigration forms (the basis for the charge against her) was the result of post-traumatic stress disorder.

Instead, Judge Drain will allow the prosecution to use documents provided by the Israelis as evidence in the case, even though these documents are the products of Israeli military courts and a “legal” system that routinely uses torture. He has even gone so far as to rule that when Rasmea testifies, she can only address issues that the prosecution agrees to allow.

No fair-minded person can accept any of this. That is why we have to go all out for Tuesday, Nov. 4, in Detroit.

Rasmea Odeh has devoted her entire life to making this world a better place. The U.S. government wants to criminalize those that stand up for Palestine. We cannot allow this to happen. We do not know how long Rasmea’s trial will last, but due to the extreme limits that Judge Drain has placed on the scope of the trial, we are urging supporters to prioritize attending the first week: Tuesday, Nov. 4, through Friday, Nov. 7.