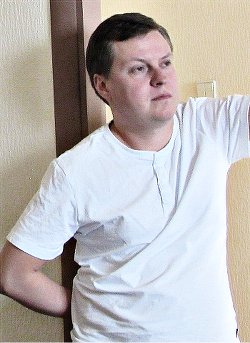 Workers World: What is the role of U.S. imperialism in Ukraine today?

Victor Shapinov: It is very significant now, and Maidan showed that. [Maidan is the pro-imperialist movement which took its name from the central square of Kiev, the Ukrainian capital, where it held protests in late 2013 and early 2014. The backbone of this movement, which received extensive funding and political support from the U.S. government, were neo-Nazi gangs and political parties. — WW]

[Maidan culminated in the overthrow of the elected government of President Victor Yanukovich in February. It brought to power an alliance of wealthy oligarchs, neoliberal politicians and fascists that have carried out a brutal war against the working class, primarily Russian-speaking population of the Donbass region and anti-fascists throughout Ukraine.]

Before Maidan, we didn’t believe that the U.S. role was so important in countries like Ukraine. We sometimes laughed at conspiracy theorists who said that everything was produced by the U.S. State Department, the CIA and so on.

Of course that’s not true, because its real basis is the capitalist crisis. Ukraine was just the weakest link in the chain of post-Soviet countries. There are many contradictions. Different imperialist forces and even nonimperialist forces, try to take advantage of this situation to achieve their goals. However, U.S. imperialism has the best instruments in this field.

For instance, in Ukrainian politics, U.S. imperialism is not limited to direct agents who are active in politics and who hold pro-Western positions. Around the edges, they have a field of friendship and alliances with nongovernmental organizations (NGOs) and human rights organizations. They do not always directly support U.S. imperialism. But in critical moments — for example, when Maidan started — in that situation, they had a command to go there and so they went.

We went to investigate Maidan at the beginning [in November 2013]. We saw only about 1,000 people, and many were from NGOs, human rights organizations and so on. We recognized many of them and some we knew personally, because when you are active in politics you get to know them.

From the point of view of political and financial mechanics, Ukraine is totally integrated into the system led by the United States. Ukrainian oligarchs all have their money, their bank accounts, in Europe and the U.S. They are closely linked with imperialist capital.

We also had political consultants such as Paul Manafort [U.S. lobbyist and campaign advisor to several Republican presidents]. He was a confidant of former President Yanukovich. But all Ukrainian politicians sought his advice. It was very good practice for them to go and ask him how to do everything. It was one of the ways for Washington to influence events. It was not overt; it was communication from Ukrainian politicians to some forces in the U.S. about how to do things in Ukrainian politics.

Another of these mechanisms is credit from the International Monetary Fund. All previous Ukrainian governments [since the breakup of the USSR in 1991] were dependent on IMF credits. The amount owed is always increasing, allowing the West to set conditions; for example, to destroy the social-care system or to raise prices of gas for the population.

WW: What is your view of the current ceasefire agreement negotiated in Minsk? [The Minsk accords were negotiated at the initiative of the Organization of Security and Cooperation in Europe (representing the European Union) and the Russian Federation. The agreement, signed on Sept. 5, was supposed to end the civil war between Ukraine and the newly independent Donetsk and Lugansk People’s Republics in the southeast Donbass mining region. On September 16, the Ukrainian parliament passed a law granting “certain areas of Donetsk and Lugansk” special status for three years.]

VS: There is no real ceasefire. Ukrainian military attacks have not stopped for even one day.

After the treaty in Minsk, we saw the most cruel artillery attack ever on the city of Donetsk, even more than in the heaviest days of the war. We believe there is some under-the-table negotiation between U.S. imperialism, the European Union and [Russian President Vladimir] Putin over how to slow the situation to something acceptable for everybody.

We think that’s the reason [former Donetsk Defense Minister and militia leader Igor] Strelkov was removed was because he was hardline in this conflict. Now we see that most military commanders don’t support the agreement. Before Minsk, the people’s militia was advancing, the Ukrainian army was depressed and close to defeat at some points.

One reason the militias don’t support this peace treaty is that there is only a small piece of land in this configuration. In this way the People’s Republics, or Novorossia, will not survive or will be completely dependent on Russia. They want to make a real state that can be independent. Of course, they want friendly relations with Russia, but it would not be a puppet.

Also — and we are exercising what influence we have on this point — it is not only about the Donetsk and Lugansk regions. It’s a question for at least a fifth of Ukraine, or maybe for all of it.

We don’t think Ukraine, even the northwest parts, should have to be under the power of the oligarchs, nationalists and fascists. People should not have to live under this regime, even if it has some mass support right now. We think it is very bad for all Ukraine. It destroys the economic well-being of the people in the West and in Kiev also.

WW: How is Borotba raising the question of autonomy and self-determination for other regions of Ukraine, such as Odessa, where neo-Nazis massacred 48 activists on May 2?

VS: After the Maidan coup, Borotba was very active in building the resistance movement in southeastern cities such as Kharkov and Odessa.

Now, from exile in Crimea, we have helped to establish a Committee for the Liberation of Odessa, which consists of some members of the Odessa regional parliament, city council members, and civil and political activists. We’ve made a demand for the Ukraine government to expand the treaty with Lugansk and Donetsk, to grant self-government and other things like their own municipal militias so the people’s militia can transform into it and have some legal rights to retain their arms, for example. Also the right of residents to education in their native languages.

We think this can be a first step to stop the civil war, which continues not only in Donbass, but in Odessa and Kharkov, not as an armed struggle, but as partisan actions and civil protests which are repressed. But still, people are going out and making demands. There is always far-right terror against activists. Many are political prisoners, some of them were beaten or killed by neo-Nazis, and others had to leave like our members, who left Ukraine and now live in Crimea.

One of the first steps toward stopping the civil war can be extending the special status for Donetsk and Lugansk to all the territories of the southeast. We will try to hold a demonstration in Odessa soon to support this demand. The ultranationalist forces are already very angry about this demand because, from our side, it is a constructive step. They can’t just say, “They are terrorists. They are separatists.”

We say, “Okay, you have passed this law on special status, so we want to use it for our regions too.” Because now these regions are directly ruled by people who were appointed from Kiev and have no roots in these regions. They utilize nationalist paramilitary gangs, who in critical situations, can defend them. So it is an occupation regime. This special status would be a first step toward some form of self-government.

But it’s only a tactical thing because as we said from the first day of this civil war, the only way to make peace is to defeat the Kiev junta. The class and social nature of the junta is to wage war against all people and groups. It is the only way for them to hold their power. That’s why we don’t believe these tactical measures, like a ceasefire or even the spreading of the special status regime to the southeast, will be a solution for Ukraine.

The forces awakened by Maidan are very destructive and dangerous for all society. We are face to face with the fascism of the 21st century. It is not because they have portraits of [Ukrainian Nazi collaborator] Stepan Bandera or because they say “Ukraine über alles” like clones of Nazi Germany. The nature of fascism is that this is direct state power of big capital that uses some mass support from the middle class and other groups to destroy any political opposition with violence. This is the essence of fascism.

They say “We are democrats, we are liberals.” But they built this political structure. Now, if you conduct opposition politics in Ukraine, they will use violence against you. It can be police violence to accuse you as a separatist or terrorist; or if they cannot use police or the Security Service of Ukraine, they use the neo-Nazi gangs that can just kill you or beat you or terrorize your family and force you to leave the city.

Part 2: The left in Ukraine and the origins of Borotba