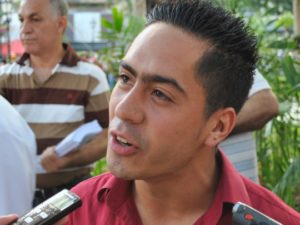 On the morning of Oct. 2, the Bolivarian people of Venezuela awoke to the terrible news of a murder during the previous night of a young revolutionary couple. Robert Serra, 27, the youngest deputy to the National Assembly elected from the United Socialist Party of Venezuela (PSUV), and his life partner Maria Herrera were stabbed to death at their home in the parish of La Pastora, a working-class neighborhood of Caracas.

The young representative was loved for his work representing the poorest communities and the youth. He was a lawyer and had founded the Advanced Revolutionary Movement to unite the most pro-revolutionary youth in the construction of the socialist country that Hugo Chávez had pointed to as the goal. Many people identified Serra as the future leader of Venezuela.

Serra was known for his outspoken denunciation of the fascist right-wing opposition, linked to Colombian paramilitaries and to former Colombian President Álvaro Uribe, which made the people think immediately that this was a political crime.

Venezuelan Minister of Internal Relations, Justice and Peace Miguel Rodriguez Torres confirmed this belief. In a press conference, Rodrigues Torres said that according to “key elements in the investigation of his and his partner’s death,” they could initially conclude that it was “not a random act committed by common criminals. We have witnessed a murder, planned and executed with great precision.” (AVN, Oct. 2)

Ernesto Samper, Colombia’s president from 1994 to 1998 and current UNASUR (Union of South American Nations) secretary general, said of Serra’s death: “It is a worrying sign of infiltration by Colombian paramilitaries.”

Since its inception, the Bolivarian Revolution has been the subject of countless attacks, from the coup of 2002 and the subsequent petroleum company sabotage to assassination attempts against late President Hugo Chávez and recently against President Nicolás Maduro. Not to mention the street blockades called guarimbas, dirty media campaigns, hoarding by rightist merchants of items necessary for the people, etc., and also threats and assassinations of leaders and key figures in the Revolution.

Among others, we note the vile murder in 2004 of prosecutor Danilo Anderson, who was investigating the 2002 coup and the oil sabotage. And more recently, the death last April of Bolivarian leader Eliezer Otaiza, president of the municipal council of the Libertador section of Caracas. Two years ago, the bodyguard of Serra himself, Detective Alexis Barreto, was killed.

Serra had blamed the paramilitaries and Uribe, an infamous collaborator with U.S. imperialism, when two young Venezuelan rightists were detained in Bogotá for plotting violent acts against the Revolution; they were then deported to Venezuela. Serra had requested a thorough investigation of these people for treason against Venezuela. Serra said, “For these crooks, murderers, fascists, our lives as revolutionaries have no value, nor even does life among their own supporters, because they carry out acts against their own people, which means they are ready to blow up the nightclubs where their own youths go if it will increase social unrest.” (rebelion.org, Oct. 6)

Everything points to the deaths of Serra and Herrera being part of the plans of one of the young deported counterrevolutionaries, Lorent Saleh. In documents captured by the Venezuelan authorities, they found as targets for assassination “lists of persons closely linked to chavista social and political movements, those who thrive on political activity in the neighborhoods and are the main drivers of the defense of the revolutionary process.” (rebelion.org, Oct. 3)

But it is not only Uribe’s movement and the Colombian paramilitaries who are involved. International connections extend to Spain. Carlos Fazio, a Uruguayan professor and journalist on the editorial staff of the Mexican daily La Jornada, wrote on Oct. 2: “The novelty now is the outsourcing of chaos, with the National Intelligence Center (CNI) of Spain getting the task of assigning covert destabilization actions for the U.S. CIA and the Foundation for Analysis and Social Studies (FAES), and former Spanish Prime Minister José María Aznar’s Popular Party acting to put together an international network of neoconservative think tanks and NGOs that promote regime change in Venezuela.” (AVN.info.ve)

Fazio mentioned that a series of conferences took place in Spain this June and July called Campus FAES 2014. Participating were Mariano Rajoy, head of the Spanish government; members of the right-wing Venezuelan Primero Justicia party; pro-coup deputy Julio Borges and the mayor of Chacao, Ramón Muchacho, organizer of the recent guarimbas; and Maria Corina Machado, founder of Súmate, an agency financed by the U.S. Agency for International Development.

Fazio continues: “The CNI would have guaranteed the training and funding needed to implement the new subversive plans in Venezuela, which are being carried out in secret and closely coordinated with the Obama administration and the CIA. … In short, during secret talks at Campus FAES 2014, the logistics were put in place for a new phase of subversive destabilization, dirty war and media terrorism by the United States and its European allies against the Bolivarian Revolution in Venezuela.”

The people, however, remain on alert together with the forces of the Bolivarian government. During the funeral of Serra and Herrera on Oct. 3, one of the slogans shouted was: “We want justice! The revolution won’t be stopped.”