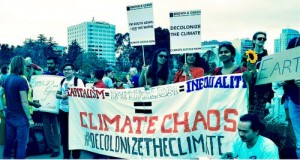 More than a thousand people gathered at the Lake Merritt Amphitheater on Sept. 21 for the Northern California People’s Climate Rally. The organizers called for a world with an economy that works for the people; a world safe from the ravages of climate change; and a world with good jobs, clean air and water, peace and justice, and healthy communities.

The event, called in solidarity with the People’s Climate March in New York held the same day, focused on local climate issues such as coal shipping through the Port of Oakland; health and safety problems as a result of dirty oil at Chevron in Richmond, Calif., and four other Bay Area refineries; and the hauling of flammable crude oil by rail through Bay Area communities.

WW asked union activist Clarence Thomas, “What is the importance of the climate movement to you as a worker?”

Thomas replied: “For going on 20 years now I personally have been involved, representing Local 10, in working with coalitions like the Ditching Dirty Diesel Collaborative, the West Oakland Environmental Indicators Project and the Pacific Institute — a think tank around environmental issues for communities of color. We engaged in struggle with the Port of Oakland to get them to establish some kind of maritime air quality standards, reducing the particulate matter otherwise known as diesel soot at the Port of Oakland. It has adverse impacts on the workers and the people who live in the communities adjacent to the port.

“You have to speak truth to power. When I found out that these blockades were taking place, with regards to stopping mountaintop removal, fracking, blockading these pipelines of various descriptions — that’s the kind of militant action that’s going to be required. I was able to draw from the experience as a longshoreman, when there have been community blockades at the port resisting apartheid in South Africa, apartheid in Israel, the actions that were taken in stopping Wall Street on the Waterfront with Occupy in 2011.

“Those were blockades, and they mean something because what they really do is to challenge capitalism, and when we’re talking about climate change and we want to stop it, that’s what you have to do. People have to begin to see the link with capitalism, because capitalism doesn’t care about the environment, it doesn’t care about the earth. It’s all about profits, and it doesn’t want anything to get in the way.

“When you talk about things like privatization, deregulation, cutting public spending, allowing the market to run unbridled — this is what leads to climate change. People need to understand that. All these dots have to be connected. They don’t want to do things to mitigate pollution because that will cut down production on the waterfront. Anything that costs them money, anything that puts controls on and changes the way they do business, the capitalists don’t want it. And that’s what people need to understand.

“This is a fundamental way of explaining what capitalism is: It’s profits before people. It’s all about the shareholders. It’s all about the market, commodifying everything. And people need to have a sense of what that means. Capitalism is against the community. It’s against democracy. When we see things such as gentrification, the displacement of people, it’s the same thing. It ties into the issue of climate change. In what way? People are being displaced so they can drill for oil; people are being displaced for fracking. All of this ties in together.”