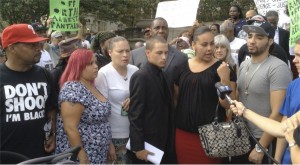 Staten Island, N.Y., Sept. 5 — Today’s appearance of Ramsey Orta in Richmond County Supreme Court became a people’s victory, as 80 people from all the New York City boroughs and from Philadelphia packed the court.

His arrest has sparked outrage and is seen in the community as retaliation for videoing the police murder of Garner. Orta is also a material witness in this case. His arrest occurred the day after the city medical examiner ruled Eric Garner’s death at the hands of NYPD officer Daniel Pantaleo a homicide. Orta’s spouse Chrissie Ortiz has also been arrested.

It took only 15 minutes for Richmond County Supreme Court Justice Leonard Reinzi to adjourn until Oct. 31, so that the defendant might secure counsel of his choice. Orta has chosen attorney and activist Alton Maddox to represent him. Maddox had acted as Orta’s interim guardian ad litem while he was incarcerated and set up Orta’s bail fund.

Accompanied by Chrissie Ortiz and two other family members, Orta addressed the rally outside the court building, thanking people for supporting him.

The rally turned into a three-hour occupation of the Staten Island Supreme Court. People wore T-shirts picturing the late Eric Garner with the words “I Can’t Breathe.” They carried signs reading “Free Ramsey Orta, Jail Pantaleo!” — the cop who choked Garner to death. Their chant of “Hands Up! Don’t Shoot!” referring to the police killing of Michael Brown in Ferguson, Mo., rang out.

Chrissie Ortiz said, “I’m just worried about my husband and getting out the truth and making sure justice is served for Eric Garner and my husband.” Ortiz who was arrested on Aug. 5 and charged with misdemeanor assault, has a court case pending. The defendant said those charges were trumped up in retaliation for her husband’s filming of Eric Garner’s killing.

Alton Maddox, who has agreed to represent Orta pro bono, gave examples of recent racist court rulings nationally. Citing his personal knowledge of the corruption in the Staten Island police and courts, he said, “We have a lot of work to do.”

Ramona Africa, a survivor of the May 13, 1985, Philadelphia police bombing that killed 11 MOVE members, said: “We should be very clear that the Fraternal Order of Police is not just a club or peace organization for cops. They intimidate, brutalize and terrify people and organizations.” MOVE had brought a delegation to the courthouse from Philadelphia.

Phile Chionesu, from the Million Women’s March, spoke of the many women of color behind bars unjustly, citing Marissa Alexander as a prominent example.

Other organizations represented at the rally included Cop Watch, 100 Blacks in Law Enforcement Who Care, the People’s Power Assembly, the Freedom Party and the United Africa Movement.

These trumped up and retaliatory charges against the Orta family for videoing the murder of Garner follow an attack by three police unions on the United Federation of Teachers for participating in the Aug. 23 rally of 15,000 calling for justice for Eric Garner.

Meanwhile, Police Commissioner Bratton continues the “Broken Windows” policy, which justifies virtually everything the police do.

In this atmosphere, District Attorney Daniel Donovan and the New York City Department of Criminal Justice cannot possibly bring to justice those who killed Eric Garner. Only people’s power can accomplish that.