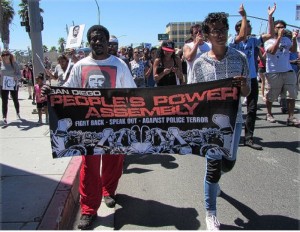 Over 100 anti-police brutality activists gathered for a rally and march in City Heights Park in central San Diego on Aug. 30 to demand justice for 17-year-old Michael Brown, in solidarity with cities across the nation that are calling for justice in Missouri.

The “Speak Their Names Rally” was called by a coalition of community organizations and individuals who said it is time for San Diego to step up and speak out against police brutality.

San Diego has a history of police brutality that is pretty much hidden from the nation’s eyes. In 2000, San Diego was ranked fourth among major cities in the U.S. where a resident is most likely to be killed by the police.  San Diego’s Committee Against Police Brutality was formed in 1999, when football player Demetrius Dubose was killed by the San Diego Police Department. In that year, CAPB recorded 14 people killed by “law enforcement.”

Between 2001 and 2013, there were at least 13 more police killings. At the rally, Carl Muhammad of CAPB explained to the assembled crowd why it is so important that we have an independent, community-elected police review board to review all cases of police misconduct.  This is the only way that the community can be assured that all cases are accurately reported and investigated, he said, as the police must know that there will be consequences for what they do.

A statement from the Democratic Socialists of America National Political Committee, read by Virginia Franco, called for community control of the police. Jesse Childs, professor at the University of California—San Diego and faculty advisor for Students Against Mass Incarceration, spoke of the campaign to stop California prison expansion in general and to stop expansion at Donovan State prison locally, construction for which is scheduled to begin soon.

Many organizations and individuals made solidarity statements, including the International Socialist Organization, Black & Pink, Affirm San Diego, the San Diego Free Mumia Coalition and Activist San Diego. Shakina Ortega, spouse of Victor Ortega — who was murdered by the SDPD in June 2012 — thanked everyone for coming out to support Michael Brown, Victor Ortega and all the others who have been brutalized and killed by the police.

“It has been two years and still no justice,” she said, “and I do not want anyone to have to go through what I have gone through the last two years. Police Officer Jonathan McCarthy, who killed Victor Ortega, is still out there ‘policing’ our streets. It is up to us to come out, speak out and let our voices be heard.  Michael Brown, Victor Ortega is you, me, any of us. We are all Michael Brown.”

The noon rally was held across the street from the City Heights Police Station, the same location where the Victor Ortega, Oscar Grant and Trayvon Martin rallies were held on earlier dates.  After a spirited march through the neighborhood, there was time for a community open mike, where people were asked to tell their stories and offer solutions.

At the closing, demonstrators formed a circle and passed around the list of the over 150 San Diego “stolen lives” and we “spoke their names.” Many in the circle said that next we need to form a committee to organize for the October 22nd “National Day Against Police Brutality.”