Protests in solidarity with the people of Ferguson, Mo., in response to the police murder of African-American youth Michael Brown continued in cities across the U.S. for a second week. Demonstrators echoed common demands for an end to racism, for justice for all victims of police brutality, and for charges against Darren Wilson, the white police officer who fired six bullets killing the unarmed teenager on Aug. 9.

On Aug. 20, over 400 people attempted to march to the police headquarters in downtown Oakland, Calif., only to be stopped a block short by a menacing line of police, stretching shoulder to shoulder across multiple lanes of traffic on Broadway. Organizers called the event “Cease & Desist: It Ends Today.”

Mothers and families of several Black youth killed by California police spoke, including Jeralynn Blueford for her son Alan; Cephus Johnson, uncle of Oscar Grant; Dionne Smith, mother of James Rivera Jr.; and Cyndi Mitchell, sister of Mario Romero. Marchers finally returned to Oscar Grant Plaza, where they broke into organizing groups to plan such tactics as expanding cop-watch activities to stop the killing. Over a dozen organizations endorsed the march. 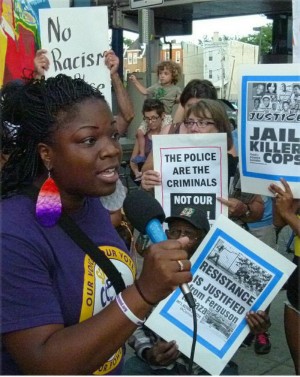 On Aug. 19, a West Philadelphia rally for justice for Brown called by People Utilizing Real Power drew 150 community activists to 52nd and Market Street. Speakers included Tamara Brooks, of Service Employees Local 668, and Marcia Lewis, mother of the 29-year-old Black man, David Ellis, who was shot and killed by police on Aug. 18 in the city’s Torresdale neighborhood. The protest ended with a march to the future location of Police Department headquarters at 46 and Market.

On Aug. 20, another 200 protesters converged in Center City Philadelphia at Love Park for a rally which ended with a march to the current location of police headquarters at 8th and Race Street. Abdus Shakur, whose son Askia barely survived a brutal beating by police in 2010, addressed the crowd. Having just returned from Ferguson, Russell Shoatz III, son of imprisoned Black Liberation activist Russell Maroon Shoatz, described the repressive conditions there. The next night over 100 people attended a meeting to plan future actions and campaigns to stop police brutality, including demanding mandatory cameras on police uniforms.

Hundreds of community members rallied at Red Arrow Park in Milwaukee Aug. 22 to demand justice for Michael Brown and all victims of police brutality and murder. Along with building anger over Brown’s murder, Milwaukee’s oppressed communities, with growing white working-class support, are increasingly outraged at police terror aimed at their communities. Many see the banks and corporations behind these assaults.

Earlier in 2014, Dontre Hamilton, an African-American man, was shot by a Milwaukee police officer 15 times in Red Arrow Park, killing him instantly. His murder follows numerous instances of police brutality against Milwaukee’s Black and Brown communities in just the past few years. Police have stopped African-American pedestrians and vehicle drivers en masse to conduct “cavity searches.” Vigilantes killed African-American youth Bo Morrison in West Bend and Corey Stingley in West Allis in 2012; both cities are in the greater Milwaukee area.

The ongoing vicious austerity and union busting in Wisconsin, particularly in the oppressed communities, is fueling resistance and also building bridges of unity and solidarity between and among white youth and oppressed youth. Thus members of numerous organizations representing wide cross sections of communities and progressive individuals outraged at the police terror unleashed on oppressed communities came out to demand justice in Ferguson, Milwaukee and other occupied places such as Palestine.

After the rally at Red Arrow Park, hundreds marched to the Milwaukee Police District 1 Headquarters for an hours-long, youth-led, militant occupation to demand justice. While protesters occupied the inside of the police station, supporters gathered outside in solidarity with them. Protesters faced off against fully clad riot police while Police Chief Edward Flynn refused to meet with community members. They dispersed when he agreed to have police representatives meet with some of the family members whose loved ones have been killed and/or brutalized by police. Many other fightback actions are in progress. For updates and information about ongoing protests and other events in Milwaukee, visit wibailoutpeople.org.

Michael Brown’s mother, Lesley McSpadden, is a member of Food and Commerical Workers Local 88. This has prompted statements critical of the shooting from AFL-CIO President Richard Trumpka and officials of the American Fed­er­ation of Government Employees, American Postal Workers Union, American Teachers Union, Communication Workers, Service Employees, UFCW, the Coalition of Black Trade Unionists and other labor organizations. Many rank-and-file workers joined the protests in Ferguson and in hundreds of cities across the U.S.