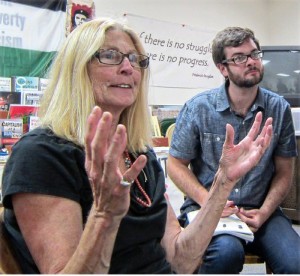 A speaking tour of upstate New York cities was kicked off in Buffalo on Aug. 4 with a meeting that filled the office of the Buffalo/Western NY International Action Center.

The Buffalo IAC introduced the speakers, Judy Bello, a member of the United National Antiwar Committee and a leader of the Upstate Coalition to Ground the Drones and End the Wars, and Scott Williams, a national coordinator of FIST (Fight Imperialism, Stand Together), an anti-imperialist youth organization, and an activist with the Philadelphia IAC.

The two speakers (pictured here) are longtime supporters of the Palestinian movement and took part in an international observation team to Syria for its presidential election in June. “Making the Connections — Gaza, Syria and Iraq: War MADE IN USA” was the title of their presentation, and it was followed by a lively discussion with many questions.

The Buffalo meeting was co-sponsored by the IAC, No Drones Niagara and Workers World Party. Bello and Williams continued the tour with meetings in the upstate cities of Rochester, Syracuse and Albany.