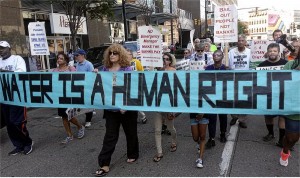 New developments took place at the end of July around the struggle for water in Detroit.

A class-action lawsuit was filed on July 21 in federal bankruptcy court involving victims of the mass water shutoffs and four community organizations: Moratorium NOW! Coalition, Michigan Welfare Rights Organization, People’s Water Board and the Michigan chapter of the National Action Network. The lawsuit demands a moratorium on shutoffs; that all those shut off be reconnected immediately; that an affordable plan be enacted where residents cannot be charged more than 2 percent of their income; and that money paid to the banks for usurious interest rate swaps be used to help pay off residents’ arrears.

Also on July 21, Detroit Water and Sewerage Department Deputy Director Darryl Latimer announced in bankruptcy court a 15-day pause in the termination of services in order to “better inform” the public of programs available to assist consumers.

The city’s state-appointed Emergency Manager Kevyn Orr announced July 29 that Mayor Mike Duggan would be placed in operational charge of the DWSD. Orr stated, “This [executive] order provides additional clarity to the powers already delegated to the Mayor. This order ensures a common focus on customer service and sound management practices that reflect the city’s commitment to refocusing its efforts to help DWSD customers get and remain current on their water bills.”

Orr has come under local, national and international criticism for authorizing the massive shutoffs of water services impacting 17,000 households throughout the city.

A statement from corporate-oriented Duggan indicates that the DWSD will continue to cut off water. There is no plan to turn back on water for people who have had their services terminated.

In a statement posted on Facebook, Duggan asserted: “There are funds available to support those who cannot afford their bills — we need to do a much better job in community outreach to tell our residents how to access those funds. We will be developing a plan that allows those who are truly needy to access financial help and allows those who want to make payment arrangements to do so with shorter wait times. As for those who can pay and choose not to, we won’t force other Detroiters to pay their bills.”

Such a statement does nothing to demonstrate that the DWSD policy of attacking Detroit’s already-beleaguered neighborhoods through massive terminations of water services will qualitatively change.

A “water affordability fair” was held Aug. 2. Early that morning hundreds lined up outside the eastside DWSD payment center. The police presence was heavy — officers sat in cars at every corner, mounted patrols on horses went through the streets and an armored vehicle was stationed in a vacant lot adjacent to the DWSD facility.

Several community groups were present as well, including the Moratorium NOW! Coalition, People’s Water Board, Detroit Water Brigade and Michigan Welfare Rights Organization. Moratorium NOW! activists leafleted the crowd and recruited people to join actions aimed at winning an indefinite halt to the termination of services.

Mixed responses came from many community residents who visited the DWSD offices seeking help. Some said that the new policy requesting a 10 percent down payment on outstanding bills was an improvement from previous demands for at least 30 percent.

Many people challenged the veracity of the bills they had received. Many who sought the much-talked-about assistance allegedly available from social service agencies found it was virtually nonexistent.

One woman had a bill of $2,100 and was being threatened with shutoff. She was demanding a hearing before the Board of Water Commissioners before arranging payments.

On Aug. 4, the DWSD announced that the expiring 15-day moratorium on shutoffs would be extended to Aug. 28.

The DWSD says it is attempting to collect $89 million in past-due bills. Approximately half this amount is owed on residential accounts. Public statements indicating that there is anywhere between $1 million to $4 million available in assistance does not address the magnitude of the demand from consumers.

Detroit has a substantial portion of residents living in poverty. The overall decline in wages, unemployment and underemployment are rife throughout the city.

There are no plans on the part of the Emergency Manager or in the austerity “plan of adjustment” before the bankruptcy court to develop any programs to create jobs and bring people out of poverty. Nonetheless, corporations are given huge tax breaks to acquire properties and build sports and entertainment districts that will not benefit the majority of working people and the poor.

A delegation of coal miners from West Virginia delivered two tons of water to St. Peter’s Episcopal Church on July 29. At the DWSD water fair on Aug. 2, a delegation from Salt Lake City also delivered water.

These noble efforts can in no way meet the demands for water needed in Detroit, but they represent acts of solidarity that further expose the failure of emergency management in the city.

Freedom Friday on Aug. 1 at the DWSD headquarters enjoyed support from local activists in solidarity with injured Colombian General Motors’ workers as well as the Women’s International League for Peace and Freedom, which was having its national congress at Wayne State University over the weekend.

Despite the announcement of a moratorium on shutoffs, reports indicate that people are still being terminated because of alleged “illegal usage.”

Palmer Park Apartments had its water services shut off under the notion that it represented a “commercial” structure and not residential, even though hundreds live in the building on the north side of the city.

Although Mayor Duggan has acknowl­edged that the billing system of the DWSD is in disarray, he has not addressed the impact of the interest-rate swap terminations in the last two years which have taken $537 million out of the city’s financial resources for the enrichment of JPMorgan Chase, Bank of America, Morgan Stanley and Loop Financial.

The Moratorium NOW! Coalition opposes efforts to privatize DWSD. Duggan, who privatized the Detroit Medical Center when he was CEO of the nonprofit organization, will in all likelihood lead efforts to do the same with the DWSD. People in the city are opposing such efforts because there is no reason to privatize the system — other than profit.

By regulation the DWSD cannot run a deficit. It is a revenue-generating system that utilizes the publicly owned department which is surrounded by 20 percent of the world’s fresh water supply.

The struggle for water is part and parcel of the overall movement against emergency management and city bankruptcy, which includes cancellation of health care programs for municipal retirees and deep pension cuts to over 32,000 working people and their families.

In addition to the massive termination of water resources, public transportation, lighting, public safety, street maintenance and other municipal services have deteriorated drastically.

Only a mass outpouring of dissent involving large sections of the working class can effectively push back the drive toward privatization, including the theft of pensions and mass water shutoffs. n