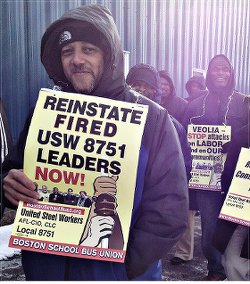 The attempt by the city of Boston to impose a racist austerity regime on its schools involves Veolia Corporation’s attempt to rip up the school bus drivers’ union contract. This includes the illegal lockout of union members last October, the firing of four of its leaders and now the frame-up charges against grievance chair and union founder Stevan Kirschbaum. The immigrant workers’ local, mainly Haitian and Cape Verdean but also African American, is highly mobilized and fighting back fiercely. So much so that even the Boston media had to admit that the union turned Kirschbaum’s July 14 arraignment into a protest that took over the chambers and steps of the Dorchester courthouse.

The union’s strong fightback urgently needs the support of the national labor movement. Below is sample text for a union resolution supporting the Boston school bus drivers’ union, United Steelworkers Local 8751. Please do what you can to get a resolution passed by your union or organization and send to [email protected] — Tony Murphy

WHEREAS: The financial and corporate sector, joined with anti-union and right-wing forces, have sunk their roots in dozens of “right-to-work states” and are now expanding into industrial states such as Ohio, Michigan and Illinois, threatening public and private unions which have historically fought to retain the integrity of their unions and collective bargaining rights;

WHEREAS: These Tea Party forces have descended on Massachusetts, and on Boston in particular, to expand their “right-to-work” strategy to organized labor and the oppressed communities and have enlisted Veolia, an international conglomerate notorious for its anti-union abuses, assaults and violations of civil law, to carry it out;

WHEREAS: Veolia, which has contracted with the city of Boston to provide school transportation for 24,000 children and which has financial allies such as Boston-based Fidelity, the country’s largest mutual fund company, which provides services to more than 20 million individuals and institutions as well as 5,000 intermediary corporations and manages 566 mutual funds with assets of $1.71 trillion;

WHEREAS: Veolia, drunk with power and resources, has targeted United Steelworkers Local 8751, whose 800 predominantly Black, immigrant and women members have a contract with Veolia to provide school bus transportation for approximately 24,000 children and, under different employers, have been providing this service for over forty years with care and concern for the safety of the children;

WHEREAS: Veolia, driven by greed, profits and no concern for the children, backed the latest city program to send 7th and 8th graders to travel alone on public transportation; has been relentless in its attack on union sisters and brothers, firing four leaders — Stevan Kirschbaum, Garry Murchison, Andre Francois and Steve Gillis — and falsely charging a founding member with phony felonies, and most of all attempting to tear up the collective bargaining agreement, now expired; and has issued an avalanche of union-busting ultimatums, unfair labor practices and demands for future contract concessions and givebacks that would destroy this proud union;

WHEREAS: USW Local 8751, with the support of the members, has heroically fought back against Veolia and their powerful anti-union, racist 1%ers; has mobilized militant fightback bus yard rallies, meetings and marches — included four solidarity actions which brought together the Black community, their elected representatives and regional labor leaders of the AFL-CIO, as well as organizations which are opposing the return of neighborhood school segregation;

WHEREAS: The city of Boston, in collusion with Veolia Corporation, has orchestrated a frame-up campaign against Stevan Kirschbaum, the local’s grievance chair and a founder of the union, charging him with an outrageous series of made-up charges that scores of witnesses say didn’t happen and have in fact given signed statements to the effect that they didn’t happen;

THEREFORE BE IT RESOLVED: We call on the Boston District Attorney to drop the false frame-up charges on Stevan Kirschbaum now and on the Veolia Corporation to re-hire Kirschbaum, Garry Murchison, Steve Gillis and Andre Francois now;

THEREFORE BE IT RESOLVED: We call on Veolia Corporation to honor the terms of the contract it signed with the city of Boston — a contract that stipulates that it will foster good relations with the union and therefore requires it to not make concessionary demands in negotiations but improve working conditions for the members of Local 8751;

THEREFORE BE IT RESOLVED: This resolution is an appeal for unity. USW Local 8751 is under siege and supports this resolution. It’s an appeal to organized and unorganized labor; working-class communities especially those of color; immigrant rights; youth and students; people with disabilities; and women’s and LBGTQ organizations which are all under attack. Allies are needed to support the heroic fightback of Local 8751 such as: (1) Pass resolutions, sign petitions denouncing Veolia, the 1%ers and their racist, union-busting, anti-immigrant program and plans to create a low-wage workforce. (2) Build and broaden solidarity against hostile corporate and financial powers that are imposing austerity, war and occupation, unemployment and underemployment, hunger and homelessness, racism and prisons, and migrant children incarcerated in concentration camps.