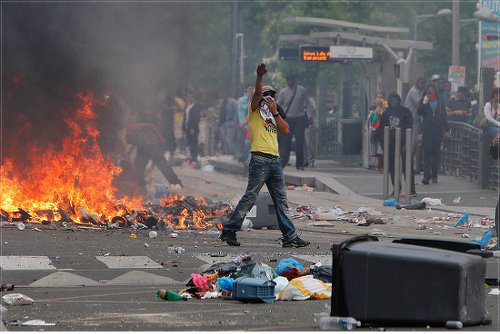 In the Paris suburb of Sarcelles.

According to the French newspaper Le Monde, on July 19 between 6,000 and 8,000 people showed up at a banned demonstration in Paris to support the Palestinian resistance in Gaza. Their main slogan was “Israel is an assassin, [French President] Hollande is an accomplice.” (Reuters, July 19)  Demonstrations, likewise officially banned, also took place in Sarcelles, a small city north of Paris, and Nice in southern France and in a number of other cities where they weren’t banned.

The previous Sunday, July 13, a pro-Palestinian march of 30,000 in Paris was brutally attacked by the Jewish Defense League. Minister of the Interior Bernard Cazeneuve used this attack as an excuse to claim the projected demonstration was “a threat to public order” and supported the decision of the prefect of police, the official in charge of the cops in Paris, to ban it.

Speaking from the former French colony of Niger, President François Hollande said: “France cannot allow conflict to be imported.  It cannot have demonstrations which confront each other, risking public disorder.” (Libération, July 19)

A number of protesters told the semiofficial television chain TV2 that the people of France have the democratic right to protest and march.  Street protests and marches are a very important and normal part of French political life.

Both Libération and l’Humanité media outlets ran live tweets of the protest as it took off so it is possible to reconstruct what happened.

When the CRS [French national] riot police blocked the protest from marching, some of the protesters threw rocks and bottles, and the cops responded with tear gas and stun grenades.  The cops used so much gas that the polluted air made it hard to breathe.

As the confrontations with the cops were becoming sharper and more intense, most of the families and left-wing political leaders left the march.  The only party to officially call for the march on July 19 was the New Anti-Capitalist Party, but leaders from most of the left parties were present.

Along with some Israeli flags, some cop cars and some other official vans were burned by the protesters. Libération reported 44 arrests and 17 cops injured.