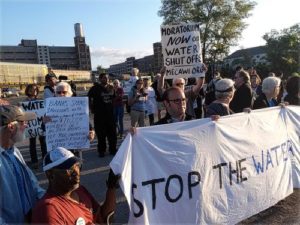 July 10 — Detroit activists concerned about the massive water shutoffs across this economically devastated city blocked entrances to the yard of Homrich Co., a firm given a nearly $6 million contract to terminate water services for hundreds of thousands of people. The company was hired by emergency manager Kevyn Orr, who was appointed by right-wing Michigan Gov. Rick Snyder in March 2013. A year ago, Orr forced the city into the largest municipal bankruptcy in U.S. history.

A picket line set up before 7 a.m. blocked the entrance to Homrich’s property for more than an hour. Eventually, police arrived and attempted to force demonstrators out of the driveway, prompting resistance and leading to 10 arrests.

Protesters were taken into custody and charged with disturbing the peace. A hearing has been set for July 21 in the 36th District Court in downtown Detroit.

The Rev. Bill Wylie-Kellermann of St. Peter’s Episcopal Church in Detroit said he would gladly get arrested again in order to further the cause of stopping the shutoffs. Also arrested was Elena Herrada, a member of the Detroit Board of Education in exile and a candidate for Michigan state representative.

The actions are part of citywide efforts to declare a moratorium on water shutoffs. The ninth week of Freedom Friday protests, which gather at the water department headquarters, is scheduled for July 11.

Already Belle Isle, Detroit Public Lighting, Detroit Public Works, Human Services and the city health department have been taken over and privatized. Tens of thousands of retirees have had their health care programs cancelled and are facing substantial cuts to pension benefits.

There is currently an effort to privatize the management of the Detroit Water and Sewerage Department. The department was struck hard when $530 million was taken out of the system in 2012 to complete yet another fraudulent interest-rate-swap deal controlled by JPMorgan Chase, Morgan Stanley and other banks.

On July 15, activists, retirees, workers and residents will gather outside the federal courthouse in connection with a bankruptcy hearing that day at which 100 people are scheduled to present objections to the so-called “plan of adjustment.” This austerity plan, if approved, would implement huge cuts in retirees’ pensions and further disempower Detroit residents and expropriate the people’s city assets and municipal governance rights.

The July 18 Freedom Friday will be held in conjunction with the Netroots Nation conference that will be taking place in Detroit. Thousands attending the event are being encouraged to come out into the streets and join protests against the water shutoffs and other austerity measures, emergency management, the banks and the forced privatization of the city.