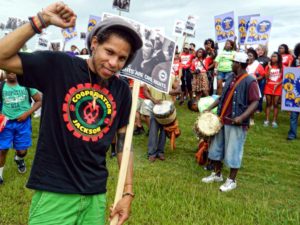 Jackson, Miss. — Freedom Summer changed the course of U.S. history in 1964, when more than 1,000 students and youth, predominantly white, descended on the state of ­Mississippi.

Fifty years ago Mississippi was a state where racism, segregation, horrific brutality, bombings, burnings, lynchings and Klan violence were the order of the day. “Segregation now, segregation forever” was the racists’ proud slogan.

Members of the Student Nonviolent Coordinating Committee, NAACP, Southern Christian Leadership Conference and the Congress of Racial Equality joined forces under the umbrella of the Council of Federated Organizations. This was the leadership of the struggle that combated the terrorism of racism and changed the racial and social landscape of Mississippi.

Fifty years ago Mississippi did not have one Black elected official. Today it has more than any other U.S. state.

The 50th anniversary of Mississippi’s Freedom Summer was celebrated June 25-29 at the historically Black Tougaloo College in Jackson, Miss., where hundreds and hundreds of activists, most in their 70s, 80s and 90s, were recognized and honored.

Not only was the past discussed and analyzed, but current issues were addressed. From workers’ rights to gay rights, from immigrant rights to voting rights, and from the struggle of the undocumented youth DREAMers movement to education and health care rights, the common thought of the week was that the struggle continues.

A more complete report on the anniversary conference will appear in a future issue of Workers World.