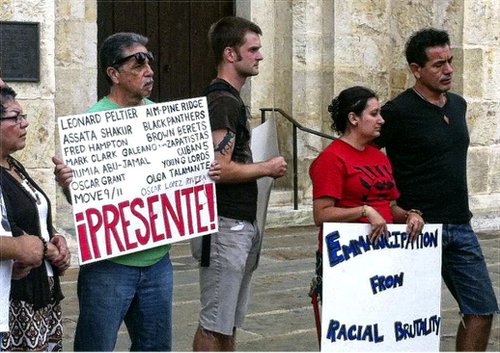 A large crowd gathered June 19 on the central plaza of the downtown cathedral in San Antonio, Texas, to celebrate Juneteenth, a state holiday commemorating the day in 1865 when word finally reached enslaved people in Texas that they had been freed two and a half years earlier.

Patricia Castillo, with the P.E.A.C.E Initiative, opened the event and then introduced the guest speakers.

One featured speaker was Debbie Bush, the aunt of Marquise Jones, a victim of the San Antonio police. He was only 23 years old when a cop, Robert Encina, killed him. No charges have been brought against Encina, who has several cases of police abuse filed against him. Jones’ mother, Cheryl Jones, also attended the vigil but just could not bring herself to speak.

Organizations participating were the Southwest Workers Union, the Brown Berets, All of Us or None and the P.E.A.C.E. Initiative, as well as several family members and friends of Marquise Jones.