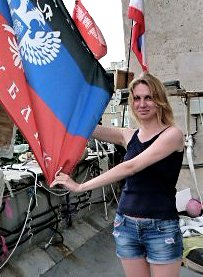 June 24 — Maria Matyushenko, an activist with the anti-fascist organization Union Borotba (Struggle), was kidnapped and her apartment ransacked in Dnepropetrovsk, Ukraine, on the night of June 23.

Dnepropetrovsk, a city in southeast Ukraine, is directly governed by far-right Ukrainian oligarch Igor Kolomoisky, who helps to finance the Right Sector fascist movement and is widely believed to be an organizer of the neo-Nazi massacre against anti-fascists and trade unionists in Odessa on May 2.

In May, armed right-wing paramilitaries attempted to kidnap two Borotba activists in the city of Kharkov. Leaders of the organization have been forced to flee the country or go underground under threat of arrest.

The government in Kiev and its State Security Police claim not to know who took Matyushenko. But the U.S.-backed junta, while saying it wants a ceasefire in its war against the newly-independent Donetsk and Lugansk People’s Republics, at the same time is intensifying its crackdown on left-wing activists, even going after youths for posting anti-fascist materials on Facebook and other social media sites.