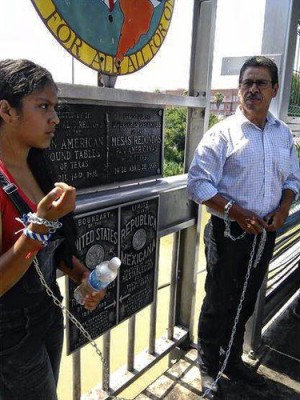 Mellany Martínez with her father Manuel Martínez on the international bridge, defying his deportation.

Families shouldn’t have to spend Father’s Day on an international bridge just to be together, but that’s what happened to the Martínez family from Houston.

Manuel Martínez Arámbula was deported in early April after he led a powerful hunger strike of over 1,000 prisoners at the Joe Corely Immigration Detention Center north of Houston. The night after a 50th birthday party for him was held outside the detention center on April 3, the Immigration Customs Enforcement deported him. His spouse, Ernestina Hernandez, and their daughter Mellany Martínez were devastated. Manuel has lived in Houston since he was eight years old.

A campaign was begun called “Regresa Papa” to fight to bring their loved one home.

On June 14, a bus trip was organized to the Mexican border at Laredo and the Martínez family was reunited in the middle of the international bridge, where daughter Mellany and her father chained themselves to each other in an emotional reunification.

Organized by Alianza Mexicana, supporters came from Houston and San Antonio, including All of Us or None-Texas; End Mass Incarceration in Houston and San Antonio; the San Antonio Brown Berets; the League of United Latin American Citizens, chapters 4994 and 4254; the New Black Panther Party; the Prevention of Migrant Deaths Working Group; and others.