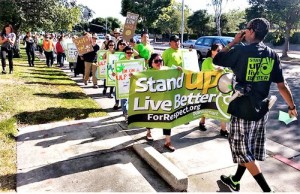 In response to company harassment and attempts to silence workers who had protested and walked off their jobs over intolerable working conditions, Walmart workers in over 20 cities struck and demonstrated June 4 in a National Strike Day and Action on Inequality. Demands included “No retaliation against workers fighting for a just wage” and “$25,000 per year and enough hours to support their families.”

The Organization United for Respect at Walmart called for a national week of actions from June 2 to June 7 to coincide with Walmart’s annual shareholder meeting in Bentonville, Ark. In April, OUR Walmart had taken the giant retail company to task over its mistreatment of pregnant workers, after many women reported being afraid to even report pregnancies out of concern they would be fired. Their actions forced some company concessions but not enough. 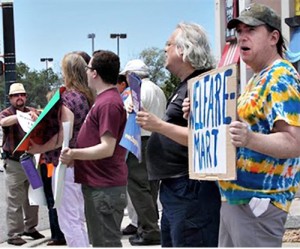 Throughout 2013 Walmart workers staged numerous protests and job actions, including strikes. In retaliation a number were fired or suffered severe cutbacks in hours. In early 2014, the National Labor Relations Board filed a complaint against Walmart for illegally retaliating against 70 workers who had participated in legally protected strikes or protests.

The week of actions in June by Walmart retail workers, following recent strikes on May 15 in over 150 U.S. cities by low-wage workers at McDonald’s and other fast food restaurant chains, signaled a resurgence in the workers’ movement in the U.S. Although the workers involved in these strikes do not belong to unions, they received support and solidarity from organized labor. 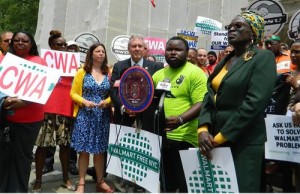 Walmart employs over 800,000 women, many with families to support. In addition to Walmart’s practices regarding pregnancies, women workers are most likely to earn less than $25,000 a year. According to the U.S. Bureau of Labor Statistics, on average the 1.3 million women working in retail earn $4 less per hour than men.

Several of the protests June 2 were led by “Walmart moms” who walked off their jobs in Orlando, Chicago, Dallas, Pittsburgh, southern California and the Bay area. In Commerce City, Colo., outside Denver, pregnant Walmart worker Jasmine Dixon was one of three workers on strike protesting the company’s treatment of women. Dixon was confined to a wheelchair due to pregnancy complications. Walmart refused her request for “light duty” and threatened to fire her if she followed orders by her doctor for bed rest.

With another child at home, Dixon, like almost all Walmart employees, relies on government assistance, including food stamps. She said, “It is time for the company to do better for its women workers. They need to be treated with respect and given basic accommodations when pregnant.”

This corporation, which claims to care about “family values” yet denies benefits to women workers, reports net earnings of $16 billion a year. Americans for Tax Fairness shows that Walmart and the Walton family received tax breaks and subsidies estimated at $7.8 billion in 2013.

Just like fast food workers, Walmart employees have begun a powerful movement for all working and poor people that can be heard in the demands nationwide for a higher minimum wage that would better reflect the cost of living. These workers are forced to take two or three jobs just to provide for their families’ housing, food and healthcare. Many also need public assistance to make ends meet.

In the Bay Area, over 100 Walmart workers, their supporters from UNITE HERE Local 2850, Service Employees Local 1021 and community members marched to the Union City Walmart to protest illegal firings, disciplinary actions and other retaliation against workers who have spoken out for better jobs so they can provide for their families. “I take home less than $1,000 a month, and after I pay my bills, I usually have only $20 in my pocket for food and day-to-day expenses,” said Walmart worker Harley Dean at the rally. “And when we stand up for living wages, Walmart threatens us, fires us and takes our hours away.”

Joanna Lopez, an electronics associate at the Fremont Walmart, told WW, “I’m here today to fight for better working conditions and higher pay. I work full time and have two children, but my friends’ average hours are 32 or less. I’m concerned about living paycheck to paycheck. I have to rely on food stamps and Medi-Cal. Honestly, it’s an extremely big, big struggle. Walmart asked for $419 just to get healthcare. That would have been all my paycheck.”

On June 2, more than 100 Walmart workers along with community supporters gathered in Phoenix for a town hall meeting on the growing inequality impacting low-wage workers across the U.S. After the meeting the group held a candlelit march to the home of Walmart heir and Board Chair Rob Walton. They gathered outside the gates of his desert estate with flags that read “Moms won’t be silenced.”

In Washington, D.C., on June 6, several hundred protesters gathered at Union Station for a brief rally before marching with Walmart strikers and workers to the downtown H Street Walmart. Marchers took to the streets militantly chanting “Whose Walmart, OUR Walmart, What are we gonna do? Shut it down.”

The American Federation of Government Employees mobilized at the corner of H Street to greet the march. Community supporters joined with several unions, including Food and Commerical Workers Local 400, AFL-CIO representatives, SEIU, UNITE HERE and OUR D.C. Rev. Graylan Hagler co-chaired with Jobs with Justice. The highlight was strikers going inside to present a letter to Walmart management, who at first refused to take it. Protesters got to the doors of the store and stayed there, despite police trying to force them to leave. They kept chanting “Shut it down.”

“Hey, Hey, Ho, Ho, Walmart’s money has to go” was a popular chant. Citing the company’s history of investment in conservative organizations, speakers denounced Walmart for being anti-worker, anti-immigrant, anti-union and anti-lesbian-gay-bi-trans-queer. A Walmart worker from Baltimore, who was hired for full-time work, complained that he usually gets only part-time at $9.70 an hour, with no benefits. When business is slow, Walmart sends workers home after they come in as scheduled.

The strikes and protests led up to a demonstration at the University of Arkansas on June 6 during Walmart’s annual shareholders’ meeting. A number of Walmart employees became company stockholders so they could attend the meeting, borrowing tactics employed by McDonald’s workers who protested at a shareholders’ meeting in Oak Brook, Ill., in May.

Walmart workers want to be treated with respect and dignity. Unable to survive on their current poverty wages, they want their wages to be raised to $25,000 a year, or $13 per hour.