Twice in one week, protests against severe underfunding of public schools took to the streets of Center City, Philadelphia.  On June 9, over 1,000 teachers, students and community activists gathered outside the Union League to denounce both Pennsylvania Gov. Tom Corbett and New Jersey Gov. Chris Christie, who were supposedly inside for a private fundraiser for Corbett.

When word came that the governors had switched the fundraiser venue to a more secure location in the Comcast building, the demonstration turned into a march through Center City streets, ending with a sit-in outside Comcast that blocked traffic.  Six demonstrators were eventually arrested for refusing to end their sit-in.

Protesters challenged the policies — promoted by both governors — that enrich corporations at the expense of working and oppressed people.  Both have cut funding for public education and health care while pushing to privatize public services. Speakers noted it was fitting that Corbett sought sanctuary at Comcast, one of the corporations that has benefited the most from his policy allowing companies doing business in Pennsylvania to avoid paying taxes by setting up dummy corporate headquarters (tax havens) in neighboring Delaware.

Comcast Vice President David Cohen, a private-school promoter who has frequently attacked the Philadelphia Federation of Teachers, is a major financial backer of Corbett’s re-election campaign. 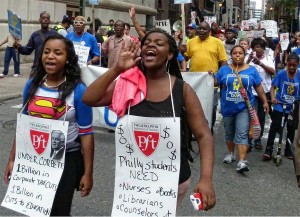 The 2013-14 school year is closing without any contract settlement for Philadelphia teachers.  While refusing to negotiate in good faith with the PFT in March, the School Reform Commission asked the Pennsylvania Supreme Court to reaffirm its alleged “right” to arbitrarily impose work rules, including the elimination of seniority.

The lack of adequate state funding is so severe that even the SRC refused to pass a budget for the next school term — no doubt fearful that yet another round of draconian cuts would result in broader protests.  A projected $216 million deficit could mean another 800 teacher layoffs and over 40 students per class. Fels High School teacher Joe Beech stated, “While they’re feasting, our schools are starving.” (WPVI, June 9)

Protesters on June 9 demanded full and fair funding to ensure all students have equitable access to resources in their neighborhoods.  They called for the abolishment of the SRC and a return to local control over schools.  A majority of SRC members are appointed by the governor.  Additional demands included fully staffed schools with full-time, on-site nurses and counselors at every school.  Two students have recently died as a result of having no school nurse at their schools when they became ill.

The demonstration called by the Philadelphia Coalition Advocating for Public Schools included members of Parents United for Public Education, Youth United for Change, the Philadelphia Student Union, the PFT, Service Employees Local 668 and the Caucus of Working Educators. Several New Jersey residents from the cities of Newark and Camden joined in the protest.

Edison High School junior Calvin Wongus told this WW reporter, “Our right to equal education and our futures are being sabotaged by this government.”  Wongus recently transferred to the Philadelphia district from Westchester County, N.Y., where “We had all the resources we needed. Here we have to fight for every penny we get for our schools every year.”

Wongus voiced concern that pending cuts in the 2014-15 school year funding would further reduce counselors necessary to help students prepare college transcripts.  “Transcripts are being thrown away.  Job training programs will be cut and classroom sizes increased to over 40 students. Rich white schools get what they need.  We walked out to fight this injustice and it’s not just in Philadelphia.”

Keme Liberato told WW: “The students may chant ‘Save our schools!’ but many want a whole new system of public education.  The schools are bad in general and students see them like prisons they are forced to go to.  These students are in motion, but what is needed is a mass movement to take on the corporations’ dismantling of public education.”

As students marched under City Hall, their chant of “P-O-W-E-R! We got the power because we are the revolution!” resounded through the concourse.