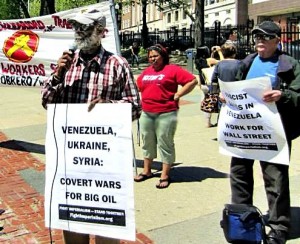 A rally initiated by the Boston International Action Center in collaboration with the Boston Committee for Peace and Human Rights was held to protest U.S./NATO intervention in Ukraine on May 17. Participants included Steve Kirschbaum and Bob Traynham from Team Solidarity and the Boston School Bus Drivers Union, Ed Childs and Judy Davis from UNITE HERE Local 26, Sarah Roche-Mahdi from Code Pink, John McLeod and Michael Borkson from the Committee for Peace and Human Rights, Brian Shea of the Disabled Peoples Liberation Front, Frank Neisser of the IAC, Gerry Scoppettuolo of Stonewall Warriors, Bunny Caristi of Workers World Party and others. The protest was organized in response to a call by the United National Antiwar Coalition for actions from May 9 to May 26.

The Boston IAC states: “U.S./NATO war moves in Eastern Europe, the Black Sea and the Baltic Sea — the borders of Russia — are a danger to the whole world. Positioning destroyers and missiles, scheduling war games and imposing sanctions (an act of war) risk wider war. We are deeply disturbed by the expansion of the U.S.-commanded NATO military alliance and U.S. recognition, and the speedy granting of billions of dollars in loans to a right-wing coup government in Ukraine, which overthrew the elected government. This illegal government has used fascist violence against all forms of peoples’ resistance in Ukraine.

“Organize the movement to say no to this war! No support to fascism! U.S./NATO hands off! Self-determination for the people of the region now! No to fascism in the Ukraine! No new Cold War! Money for jobs and education, not war and racism!”