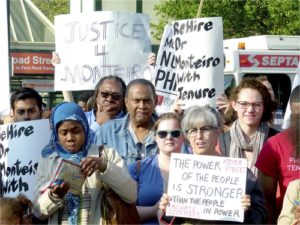 Hundreds of students and community activists gathered at Temple University in Philadelphia on May 8 for a rousing rally calling for the rehiring of Dr. Anthony Monteiro and the firing of Dean Teresa Soufas.

A popular professor in Temple’s African-American Studies Department, Monteiro was notified in February that his contract would not be renewed despite his being promised tenure when he came to Temple over 10 years ago. Monteiro’s firing appears to be politically motivated given his support for political prisoner Mumia Abu-Jamal, his outspoken criticism of the corporatization of Temple, and the university’s constant gentrification of the surrounding African-American working-class community. For years Monteiro taught W.E.B. DuBois’ “Black Reconstruction in America,” and he recently conducted community based classes on Black Liberation and philosophy.

This rally follows weeks of student protests, sit-ins, community marches, and the collection of over 1,000 signatures on petitions to Temple University President Neil Theobald. As the rally ended, dozens of students moved onto Broad Street, blocking traffic to drive home their ­demands.