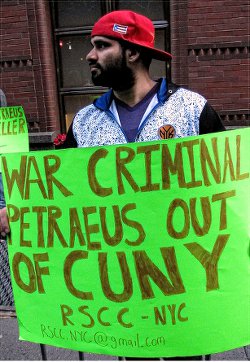 Students from the City University of New York and others stood in protest May 6 across from CUNY’s McCauley Honors College on West 67th Street, where retired Gen. David Petraeus was lecturing that afternoon. Petraeus was formerly director of the CIA and prior to that, top commander in U.S.-occupied Iraq and Afghanistan, so there were good reasons the protesters considered him, as it read on one sign, “wanted for genocide.”

The demonstrators also protested the CUNY administration’s decision to start ROTC programs at some CUNY schools — to turn students into officers for the U.S. imperialist military — and the arrest last fall of six CUNY students for protesting against ROTC programs. CUNY’s 24 schools accommodate 480,000 students, mostly people of color and 40 percent born outside the U.S.