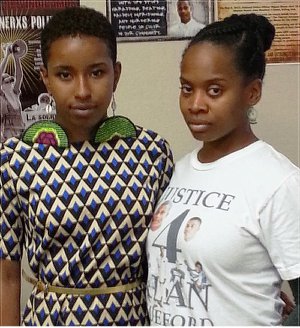 Oakland, Calif. — The Bay Area Rapid Transit police have achieved notoriety once again, this time with the brutalization of Nubia Bowe, a diminutive 19-year-old Black woman. The brutality continued at the hands of Alameda County sheriff deputies once Bowe arrived at the Santa Rita, Calif., jail. Workers World interviewed Bowe and her godmother, Carroll Fife, about Bowe’s ordeal at the hands of police.

Workers World: What happened the night you got arrested?

Nubia Bowe: After work at Job Corps, I was coming home on March 21. I was with my boyfriend [and a friend] on the way home from San Francisco to Fruitvale BART. We were stopped at Lake Merritt BART by three BART police saying we had to step off the train. They said we were dancing on BART, soliciting money and causing a disturbance. Several people approached the cops saying we didn’t do anything and why did we need to get off the train. We told the cop that the person who identified us needed to get off to re-identify us. That never happened.

James [a friend] and Levi Allen [Bowe’s boyfriend] were physically removed and handcuffed. I went to the train car of the person who falsely identified us and told him he needs to get off to identify us.

I was pulled off the train by a different officer. He slammed me against the wall, busting my lip, and then he slammed me on the ground. I was taken to the Lake Merritt [holding cell] waiting to be transferred and held there about three hours, separated from my friends.

I was taken to Santa Rita jail. After they processed me, they put me in a holding cell for a long time. I had to use the bathroom and knocked on the door. They asked me to step out of the room and put my hands above my head.

Vicious attacks, torture at the jail

NB: They slammed me against the wall. They took me to a different section with one female [deputy] cop and three male [deputy] cops. They started beating me up — all four of the cops, while I was on the ground. They put me in arm locks, joint locks, stepped on my feet and my face.

They brought a straight jacket mechanism, where my legs, body, upper body were tied together, keeping me in a sitting-up position. Then they tipped me on my side. They left me in the room with a spit mask on my head [shower cap over the head tightened around the neck with an elastic band]. I couldn’t breathe. I got out of it by removing the restraints so I could breathe.

One of the deputies noticed that I got out of it. He threw me on the ground. They put the spit mask back on, so I couldn’t see what was going on and beat me up again. They put the restraints back on and tipped me on my side again, leaving me there for about four hours. A nurse came over and took pictures of my lip being bruised and my wrists and forehead, which were swollen. Then they moved me to another holding cell by myself.

WW: How long were you held in Santa Rita?

NB: I was there for four days, never being allowed to call anyone. Every time it was my ‘pod time’ [time off for personal needs] they said the computers were down. I was in isolation the whole time. They put feet and hand chains, which were tied to a chain belt, on me every time I left the cell.

WW: What about the charges?

NB: While I was in the cage [in Lake Merritt BART], they told me I was being charged with intimidating a witness and felony mayhem, misdemeanor assault on a peace officer and resisting arrest. Sunday morning [March 23] they fingerprinted me, took pictures and booked me again for what happened Saturday morning in the jail. The charges were assaulting a deputy and resisting arrest in Santa Rita jail. I went to my arraignment on Monday while still in custody for the BART charges.

Carroll Fife: She was released on her own recognizance for the four charges at BART. We didn’t know bail must be posted for the Santa Rita charges. She was sent back to Santa Rita. Then we waited for the bail to process. Nubia was finally released around 2 a.m. Tuesday [March 25].

As a result of the arrest, Bowe was kicked out of the training program at Treasure Island Job Corps. The felony charge was dropped from the BART charges, leaving three remaining charges; the Santa Rita charges remain.

The One Shot Away Coalition has been formed to organize Bowe’s defense. It was formed on the premise that “under the current state of police terrorism, we are all one shot away from incarceration, death, etc.”

The pretrial for the Santa Rita charges is May 19 at the Gale/Schenone Hall of Justice, 5672 Stoneridge Dr., Pleasanton. Bowe has an Aug. 5 trial date for the BART incident.

To see a video of Bowe’s attack and arrest on the BART platform, visit tinyurl.com/kn4ocxf.

Join the Facebook page for the One Shot Away defense committee: facebook.com/oneshotawayba. As of May 5, the page has over 1,600 “Likes.”