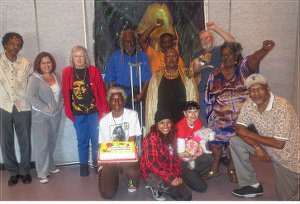 Sylvia Cameron Telafaro of African American Writers & Artists provided a dramatic reading of a poem about Mumia by Alice Walker to start off the program. An excellent PowerPoint slide presentation on African and African-American cultural and political notables, put together by Verdieu, was narrated by Mumia himself.

Representing the group All of Us or None, the Rev. Dennis Malone urged attendees to join the fight against ongoing prison expansion in California. Birthday cake and food prepared by Telafaro were enjoyed by all.