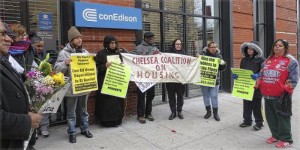 New York — A group of people from several New York City-based organizations came to East Harlem on March 23 to show their solidarity and support for the community in the wake of the March 12 gas explosion that killed eight people and injured more than 50. They also demanded reparations for this mostly Latino/a community, known as El Barrio, and an environmental cleanup of the area, whose residents are still suffering from the aftereffects of the blast.

The 127-year-old gas main that burst, razing two buildings and causing extensive damage to the rest of the neighborhood, was operated by Con Edison.

Members of the Chelsea Housing Coalition, People’s Power Assembly, Occu-Evolve, May 1st Coalition for Worker and Immigrant Rights, Parents to Improve School Transportation, Comite Pimón and Workers World Party began the day at the Con Edison East Harlem Payment Center. After protesting the company’s criminal and racist negligence, the group left a poster with the names of the eight dead directly beneath the big Con Edison sign.

The activists then marched to the explosion site, handing out roses in commemoration of the dead and a statement of solidarity along the way. Members of the community shouted along with the chants. The protesters laid a wreath at the site and held a moment of silence, then conducted a mic-check speakout about the explosion.

Rosa Maria de la Torre, of the Chelsea Housing Coalition, told Workers World: “The response was very good. We picked up a few people who saw us, joined in and marched to the end. People were complaining about chest pains and emotional issues, such as having nightmares. Many displaced people are still in shelters. Three-fourths of the buildings in the vicinity of the blast are still boarded up and don’t have windows.”

The statement handed out to the community read in part: “The organizations below have come together to show our solidarity and love and to express our condolences with the people of East Harlem and El Barrio. … We want to make sure that Con Ed and the landlords are held accountable and to make sure that this does not happen again.” The statement called for Mayor Bill de Blasio to declare an immediate housing emergency, for reparations, a citywide people’s investigation and an environmental cleanup of the area.