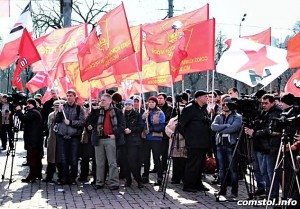 Youth were among those who rallied in Moscow against fascism, March 22.
Photo: Kolomna Bush

Hundreds of communists and other leftists turned out for a rally and concert in Moscow entitled “Ukraine without Fascists or Oligarchs” on March 22. The event was initiated by Red TV to establish an “Antifascist Resistance Center” in solidarity with those organizing against the U.S.-backed coup in Ukraine.

The action grew out of a “Statement of Communist, Left and Anarchist Forces of Russia on Events in Ukraine,” previously reprinted by Workers World newspaper. Many of the signing organizations were represented on the speakers’ platform, including the Russian Communist Workers Party, ROT Front, Left Front, Kolomna Bush and the United Communist Party.

While these organizations present differing views on the role of Russian capitalism in the current crisis, all agreed with the slogan “Fascism is a product of capitalism” and expressed their solidarity with the anti-fascists in Ukraine. For these reasons, organizers said, they believe the rally was a step forward toward building a united anti-fascist front of the Russian left.

A message of solidarity from the Union Borotba (Struggle) and Antifascist Resistance Center of Ukraine stressed: “Today, the leftist movement in Ukraine suffers from systematic pressure from the Kiev junta, and is in dire need of international support. With the victory of the coup, the left are forced to work illegally in many areas — including in Kiev, where the offices of Borotba and the Communist Party of Ukraine were destroyed.

“We thank you for your solidarity and support, which is crucial today to the Ukrainian left and for Ukraine’s future. We feel it, and it helps us to maintain morale and strengthen our political work.”