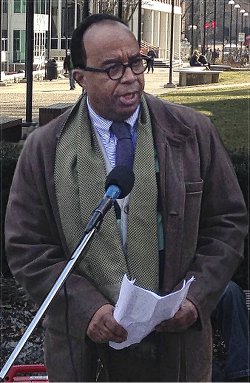 “Some will say, ‘You’re a Marxist and a socialist. That you teach W.E.B. DuBois’ magnum opus “Black Reconstruction in America.” That you teach C.L.R. James and Amiri Baraka.’ Are you telling me that you can have a Department of African-American Studies without teaching the radical tradition and the traditions of socialism? And, if that’s what you’re telling me, then you’re telling me that you want a department built on a lie.”

Temple University, located in the heart of the African-American working-class community of North Philadelphia, has continued its plan to corporatize public higher education at the expense of its neighbors. While it pushes deeper and deeper into the community with its student housing, sports facilities and hospitals, it also seeks to whitewash its ­curriculum.

Home to the country’s first doctorate program in African-American Studies, Temple has since its founding been a university that has offered an excellent education to the working class. Since then, it has become famous for being a multinational public university. Famed political prisoner and legendary writer Mumia Abu-Jamal plans to apply to get his Ph.D. in African-American Studies from ­Temple.

For the past ten years, Dr. Anthony Monteiro has mentored and taught hundreds of students at Temple who would become activists. The students have led Occupy Philadelphia, the fight to free Mumia Abu-Jamal, and more recently have been in the forefront of the struggle against gentrification and police brutality near Temple. Monteiro has regularly given Saturday classes on Black Liberation and Philosophy to hundreds of community members and students.

In January, much to his surprise, Monteiro’s contract was not renewed. When he came to Temple a decade ago, he was promised tenure. Like so many other professors, this promise was a lie.

As a former member of the 1960s Revolutionary Action Movement and an activist ever since, Monteiro is not afraid to take action. On March 10, around 200 students and community members rallied to demand: “Reinstate Dr. Monteiro! Fire Soufas!” They were referring to Teresa Soufas, the dean of Liberal Arts, who, along with the recently appointed chair of the African-American Studies department, Dr. Molefi Asante, fired Monteiro.

Rally confronts all-white Board of Trustees

Henry Nicholas, president of 1199C Hospital Workers Union, which represents more workers than any union on campus, spoke on the need to take this fight to the Board of Trustees. He also clarified how Dr. Asante called for Monteiro’s firing, stating, “University president Neil D. Theobald confirmed that it was Asante who asked Soufas to kick Monteiro off the faculty.”

Sacaree Rhodes, a community activist who organizes against hunger, homelessness and gentrification, led hundreds into a direct confrontation with the Board of Trustees. Declaring that “Soufas is a goddamn racist!” Rhodes’ demand connected the immediate needs of the community with the fate of Dr. Monteiro.

Professor Monteiro addressed the crowd prolifically, calling for “a new paradigm” for the relations between the University and the surrounding community, which is among the poorest areas of Philadelphia.

He then called out Soufas, saying: “Her tenure has been troubled. It has been based upon a demonstrable misperception, a demonstrable lack of knowledge and a flawed racial philosophy. It is time for a new beginning in the College of Liberal Arts.

“Her own statement that she did not see a Black community in the center of this great city. … This all manifested a flawed racial philosophy that suggested that the poor were poor because there was something wrong with them.”

After Dr. Monteiro’s speech, the community and students stormed the Board of Trustees meeting for the second time, where they were met with contempt by Temple President Neil D. Theobald and the lily-white Board of Trustees. Three activists were permitted to speak on the case. Then the meeting ended abruptly, with the Board leaving. Students decided at that point to sit-in in the building, not leaving until they met with the Board. Eventually, several members of the Board met with five students to discuss their concern that Dr. Monteiro get reinstated.

On March 18, the students will hold a student assembly to plan for the next steps to push Temple to rehire Dr. Monteiro. This powerful movement connects the issues of poverty, gentrification, education rights and Black liberation and could prove to be a struggle which could help transform all of Philadelphia into a more just place.