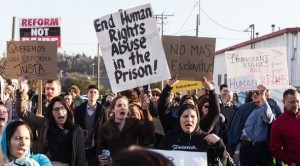 Tacoma, Wash. — Immigrant workers imprisoned in the Northwest Detention Center here launched a hunger strike on March 6. As of March 16, the strike continues. This protest at the fourth largest immigrant detention prison in the country has attracted widespread support. The strike is part of the growing movement against deportations and the separation of families. This heroic action puts pressure on the Obama administration to end the Immigration Customs Enforcement deportation regime.

The prisoners have made basic survival demands. They want better food — not the same thing every day; better treatment; better pay — they receive only $1 per day for prison labor; lower commissary prices; fairness; and an end to deportations!

On March 6, 1,200 prisoners refused meals. Now the strike is down to a smaller number. Activists in touch with the prisoners say twenty of them have been thrown in “the hole” as retaliation for leading the action. One of the organizers, Ramón Mendoza Pascual, says the strike will continue “as long as it takes.”

The group Not One More Deportation blocked deportation buses from leaving the prison in late February. That’s when the prisoners said they decided to launch their struggle.

Prisoners’ families and an estimated 250 people from the community demonstrated in the street in front of the prison on March 11. Community support vigils/demonstrations also continue outside the prison every day. Speakers on March 11 condemned the for-profit prison industry, since the Northwest Detention Center is owned by the Geo Group, with Wells Fargo Bank being its biggest stockholder.

Maru Mora Villalpando of Latino Advocacy told demonstrators on March 11: “The federal government is turning our families over to a corporation that’s driving their treatment down in order to drive their profits up. We will stand with the detainees and ensure their request for fair treatment is met.”

The prisoners, refusing to be victims, have joined and are helping to lead a nationwide movement against unprecedented levels of detentions and deportations.