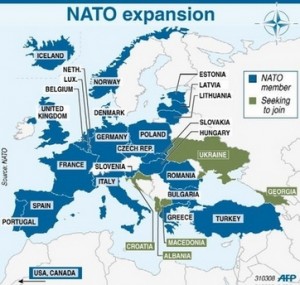 Behind Washington’s hypocritical talk of “national sovereignty,” “territorial integrity” and “international law” in its efforts to undercut the overwhelming vote of the people of Crimea to join Russia stands a stark struggle over whether Ukraine will be dragged into the ever expanding, U.S.-commanded NATO military web.

Since 1995, the year NATO waged its first aggressive war against Yugoslavia, NATO has expanded into nine countries of Eastern Europe and three former republics of the former Soviet Union.

The Obama administration is using more than words in this deepening struggle.

The Pentagon has moved F-16 fighter-bombers, F-15 fighters, C-130 transport planes and RC-135 aerial tankers to Russia’s borders and sent the USS Truxtun destroyer, armed with cruise missiles, which can carry nuclear warheads, into the Black Sea. Washington threatens economic sanctions, putting pressure on Germany and other EU members to join in. A lot is at stake.

NATO membership was a key provision in the agreement that Ukraine’s President Viktor Yanukovych balked at signing with the EU last November. The Maidan Square occupation in Kiev, the capital, aimed at stampeding the government into joining the EU and NATO. Fascist ultraright paramilitary organizations, such as Right Sector and the neo-Nazi Svoboda party took the lead.

During the Kiev occupation and since, these openly armed terror organizations burned political offices of communists, pulled down revolutionary statues, attacked gay people and defaced homes of Ukrainian Jews. Despite their open fascist symbols and criminal acts, Arizona Sen. John McCain, Secretary of State John Kerry and Assistant Secretary of State Victoria Nuland openly met with and embraced these reactionaries.

On Feb. 21-22, the fascist forces overthrew the elected government, seized Parliament and expelled government officials, even though Yanukovych had just reached an agreement with the EU, including many concessions and the scheduling of new elections. The first act of the coup government, after deposing Yanukovych in a rump parliament, without a quorum, was to ban Russian and Greek language usage by Ukrainian minorities and to end Crimea’s autonomy within Ukraine.

Within days, the coup regime named fascists to key posts in the new state — the Svoboda Party’s Andriy Parubiy as secretary of the National Security and Defense Council, Right Sector head Dmytro Yarosh as his deputy and Svoboda’s Ihor Tenhyok as minister of defense. The U.S.-favored right-wing banker Arseniy Yatsenyuk became prime minister.

The immediate attack on Crimea’s autonomy confirms how well the coup government fell in line with NATO’s plan for expansion. The Crimea is the only non-Arctic base to provide a port for the Russian Navy.

Washington and Berlin immediately granted recognition to this coup government. In an effort to lend further legitimacy, the unelected Yatsenyuk was invited to a meeting at the White House and to the United Nations Security Council.

It should be no surprise then that the gut response of most of the population of the Crimea to this fascist threat was to hold a referendum on whether to continue autonomy or rejoin Russia. Nor that Russian Prime Minister Putin decided to order Russian troops, whose presence in Crimea is approved of by treaty with Ukraine, to secure their position in the peninsula. The collective memory of the Russian-speaking majority in Crimea is shaped by stories of the Nazi invasion and massive destruction in World War II.

This is not the first time that U.S. imperialism has used terror tactics and economic destabilization, and publicly embraced paramilitary monsters.

The videos of Blackwater mercenaries and right-wing militias operating in eastern Ukraine and movements of Ukrainian military and National Guard raised great apprehension.

If the fascist coup government could in one measure end Crimea’s long held autonomy, the likely next step would be to order the Russian Navy out of its own base. Perhaps it would expel a large part of Crimea’s population. If that seems unbelievable, consider what happened in other U.S. supported rightist coups in Croatia and in Kosovo, a province of Serbia, and their similarities with the Ukraine situation.

During World War II, the fascist Ustashe had welcomed the Italian fascist and German Nazi occupation and carried out genocide against the Jewish and Serbian populations of Croatia. A united multinational partisan resistance movement throughout Yugoslavia finally defeated the fascists, drove out the German army and laid the basis for the Yugoslav Socialist Federation as the war ended.

The return of this same criminal Ustashe organization, its 1991 declaration of independence for Croatia and separation from the Yugoslav Federation were immediately recognized by Berlin and soon by Washington. This political support for a right-wing separatist movement by the U.S. and Germany, combined with the 1995 attack on Bosnia and the 1999 NATO air war, led to the breakup of the Yugoslav Socialist Federation.

After declaring Croatian independence in 1991 and taking command of the police and military, the Ustashe carried out  attacks on the Serbian population. It outlawed the rights of the Serbian minority, who had lived in Croatia since the Middle Ages, expelling them from their farms, evicting them from apartments, firing them from state jobs and cancelling their pensions and social services.

Fearing the mass executions like those these fascists had carried out during World War II, the Serbs in Croatia resisted and civil war broke out. By 1995, more than 200,000 Serbs had been driven from the Krajina region in Croatia.

Similar rightist forces unleashed the civil war in Bosnia, another republic of the Yugoslav Federation. This led to even deeper ethnic divisions, great destruction and loss of life.

Before the Ustashe seized power in Croatia, the annual U.S. Foreign Appropriation Law 101-513 in 1990 created a political and economic crisis in the Yugoslav economy. It cut off all aid, trade, credits and loans until each of the six Yugoslav republics held separate elections for independence. At the same time, secretly funded mercenaries and militias flooded into the region, spreading terror.

In both Russia and Ukraine, many are aware of the U.S. role in shaping the civil war in Bosnia to justify NATO intervention. First, in 1995, U.S./NATO used 400 aircraft and 5,000 personnel from 15 nations in the 21-day bombing of Serbian-held positions in Bosnia. Then, Washington imposed the Dayton Accords, which stationed 60,000 NATO troops in Bosnia.

This bombing and occupation of Bosnia was the first crucial step in the expansion of the NATO military alliance into the Balkans, and then into East Europe and the former Soviet republics.

The North Atlantic Treaty Organization is a military-machine alliance under U.S. domination and run to project Wall Street’s interests. NATO has a U.S.-commanded military structure imposed by U.S. corporate policy since it was founded in 1949, at the peak of U.S. power.

Since the 1991 collapse of the Soviet Union, NATO has aggressively expanded until it is now the biggest political-military alliance in history, with 28 member countries. Its “partnership programs” bring the total number of countries trapped in this U.S.-spun military web to 70 countries. U.S. taxpayers pay 70 percent of NATO expenses, a huge subsidy to U.S. military corporations.

The combined defense expenditures of all 28 NATO countries in 2013 amounted to $1.02 trillion or over $1 million millions. In comparison, Russia spends $90 billion. Iran spends under $7 billion. (Stars and Stripes, Feb. 25 — tinyurl.com/o332a4e)

In addition, NATO troops are part of the 13-year continuing U.S. occupation of Afghanistan. From 2004 to 2011, tens of thousands of troops under NATO command participated in the eight-year occupation that destroyed Iraq.

NATO cut Kosovo province out of Serbia, creating a NATO protectorate with 50,000 troops and building Camp Bondsteel, a massive U.S. military base. Despite the U.S. pledge that Kosovo was historically part of Serbia and would remain so, Washington quickly recognized Kosovo’s independence in 2008.

In 2011, NATO bombed Libya for 220 days, with 26,500 sorties, overwhelmingly flown by the U.S. Air Force, but with 19 countries pulled into the imperialist aggression. Communications centers, apartment buildings, water networks and the electric grid were targeted. The reactionary militias that U.S./NATO funded and backed up militarily brutally tortured and murdered Moammar Gadhafi, the leader of this African country.

The imperialists fraudulently called each of these blatant aggressions “humanitarian acts” to prevent “genocide” or to protect peace. In fact, each NATO operation was a brutal act of colonial conquest and expansion.

NATO’s main task at its 1949 founding was to confront and challenge the Soviet Union. But it was also established to secure U.S. military and economic domination in Western Europe, a check against working-class uprisings and the rise of any imperialist competitors. It wasn’t until 1955 that the USSR and East European countries established the Warsaw Pact to counter NATO’s Cold War pressure.

In 1990, as the Soviet Union was retreating under the pressure of 45 years of Cold War, U.S. Secretary of State Baker and German Chancellor Helmut Kohl made a commitment that was quickly broken. They said NATO troops would not expand “one inch” further east, not even into the former German Democratic Republic.

The USSR’s conciliatory Mikhail Gorbachev leadership swallowed this commitment and agreed to withdraw the 380,000 Soviet troops from East Germany, where by treaty they had a right to be stationed since the end of World War II in 1945. This in effect ended the Warsaw Pact military alliance. (Counterpunch, March 13; The Atlantic, March 3)

Despite these talks and agreements, the expansion of NATO right up to the borders of Russia has been the focus of U.S. policy through both Republican and Democratic administrations.

Although U.S. policy had long been to support and fund dissident individuals and organizations of opposition throughout the Warsaw Pact countries, after 1990 the floodgates opened. Western corporations and banks sought resources. Exiled wealthy families surged back into the region to attempt to reclaim ownership of industries, vast estates and swaths of land they had previously owned that had been collectivized.

Fascist groups from the Ustashe in Croatia to Svobodo and the National Socialist Party in Ukraine, the war criminals whom the CIA had smuggled west at the end of WW II and helped to secretly maintain in exile for decades, surged back in. They returned awash in funds for offices, staff, publications, political parties, nongovernmental organizations and civil society organizations.  They drafted and printed anti-communist schoolbooks full of extreme sectarian nationalism and ethnic hatred. They also established militias and hired armed thugs to defend their newly seized assets.

For the past 20 years, a handful of pirates and privateers in each of the formerly socialist countries were absorbed in laying hold of every resource, industry or source of formerly collective wealth and making deals and partnerships with U.S. and EU corporations and moving vast sums of money to the West.

These new oligarchs assumed that they would be offered an equal seat at the capitalist table. They foolishly did not realize that they were the main course. This is the age of capitalist overproduction, decline and commodity super abundance. There is no more room at the table.

By clear majorities, country polls of almost every new NATO member showed that the people opposed joining NATO.  But imperialist conquest takes place through stealth and deception and through bloody wars and massive destruction, not democratic choice. The lessons of past NATO crimes and the rich history of resistance to fascism throughout the region serve as a model for the anti-fascist, progressive and working-class forces throughout Europe today. The only way to defeat fascism and imperialist domination is through multinational working-class unity, organization and a will to struggle.

The author was in Yugoslavia during the 1999 U.S./NATO bombing and witnessed the massive civilian destruction. She is a co-author and editor of “NATO in the Balkans,”  (1998) and “Hidden Agenda — U.S./ NATO Takeover of Yugoslavia,” (2002), both published by the International Action Center.