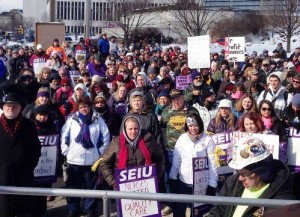 Altoona, Pa. — For more than three months, 142 locked-out members of Utility Workers Union Local 102 have walked the picket line in the freezing cold here in western Pennsylvania, demanding that Penelec — a subsidiary of FirstEnergy Corp. — give them back their jobs. The lockout began on Nov. 25, 2013, after the workers rejected the utility company’s contract offer.

The bosses showed no mercy during the holiday season or when winter storms hit the area. The workers faced tough times, like something out of a Dickens novel.

Then on Feb. 1, over 400 workers from 34 different unions throughout the small city of Altoona gathered for a solidarity rally with the electrical workers. The mood was militant. One worker told this reporter he would remember that day for the rest of his life.

Though the weather continues to be bitterly cold, the workers are still walking the picket line while the head honchos of the company continue to wage class war.

The solidarity displayed on Feb. 1 is exactly what is needed by these locked-out workers and for the entire working class, as companies throughout the land are on an offensive against them.

On Feb. 11, soon after the solidarity rally for the utility workers, hundreds of nurses at the University of Pittsburgh Medical Center in Altoona, members of the Service Employees union, held a one-day strike demanding better staffing ratios. They were joined on the picket line by other hospital workers and supporters after company representatives had walked out of contract negotiations for a second time. In the evening, they held a candlelight vigil.

The strike was to be for only one day, as the nurses were concerned about the welfare of the patients. However, on Feb. 12, nurses and others walked the picket line again. At one point, they marched to the hospital entrance, but most were prevented from entering. A protest rally was held later at the UPMC headquarters in Pittsburgh. One nurse on the picket line carried a sign reading “Patients before Profits,” which seemed to sum up the sentiments of all the strikers.

As of Feb. 28, after all the nurses had returned to work, they were voting on a new contract offer from the hospital.