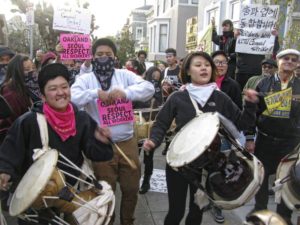 The Korean Consulate in San Francisco was the site of a militant demonstration in support of the Korean general strike called by the Korean Confederation of Trade Unions (KCTU) on Feb. 25.

There was a loud cheer when the spirited drummers from the Asian Pacific Youth Leadership Project marched in. Lo Hobak spoke from the group, chanting “Respect all workers from Oakland to Seoul,” demanding support for “work that is free from racial and sexual abuse.” Other youth from APYLP led a chant, “It is our duty to fight for our freedom, it is our duty to win; we must love each other and protect each other, we have nothing to lose but our chains.”

Ken Riley, President of International Longshore Association 1422 in Charleston, S.C., gave a solidarity statement from the ILA. “We are tired of workers being beaten down all over the world,” said Riley. “The imperialists are wreaking havoc on the working men and women and their families all over the world.”

Jordi Aragunde gave greetings from the International Dockworkers Council and the Catalan-Balearic Area Port of Barcelona stevedores. “This is not a fight of the workers of Korea,” said Aragunde, “This is a fight between the working class and the capitalists. … Free all Korean workers, drop the charges and fines, stop the government repression against the unions [and] defend the right to strike.”

Roger Scott, of American Federation of Teachers local 2121 from San Francisco City College, said their struggle to keep the college open was also a struggle against privatization. Dave Welsh, of Communities and Postal Workers United, said, “Just as they’re fighting the privatization of the railroads in Korea, we’re out fighting to prevent the privatization of the post office, selling it off to the greedy capitalists, piece by piece. Haiti, one of the poorest countries in this hemisphere, used to have a strong nationalized sector, but when they had the coup d’etat in 2004, sponsored by the U.S. and France and Canada, one of the first things the coup regime did was privatize the public enterprises.”

The rally, initiated by the Transport Workers Solidarity Committee, was supported by the San Francisco Labor Council and other unions and organizations, including Workers World Party, Marcha Patriotica de Colombia – capitulo California, and Communities and Postal Workers United. To view a dynamic video of the demonstration, go to https://www.youtube.com/watch?v=xtnvBQZRaxs&feature=.