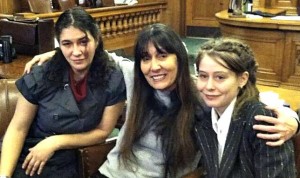 Three environmental activists will be sentenced by a Michigan judge March 5 after their Jan. 31 felony convictions for protesting at a tar sands pipeline construction site. Vicci Hamlin, Lisa Leggio and Barb Carter had their bail revoked and were immediately sent to jail by Ingham County Judge William Collette following their jury trial. They were declared guilty of trespass and “resisting and obstructing” police officers, and face sentences from two to three years in prison.

The three environmental activists carried out a peaceful protest in July 2013 against the expansion of the Enbridge pipeline that carries oil from tar sands. In what many consider an outrageous interpretation of the resisting and obstructing law, felony charges resulted from the protesters’ refusal to unchain themselves from heavy machinery.

During the trial, Judge Collette refused to allow the defendants to argue “environmental necessity” as the motivation for their actions, despite a massive spill from an Enbridge pipeline in Kalamazoo, Mich., which contaminated the Kalamazoo River and surrounding land in July 2010. The judge also openly complained about protesters and threatened action against those who demonstrated outside the courthouse during the trial.

Across the United States, concern is growing about oil and chemical spills. Vast amounts of oil are being carried by pipelines, trucks and trains for the enrichment of the giant oil and chemical corporations. Safety is often neglected in their drive for superprofits.

The U.S. has about 2.5 million miles of pipelines, which suffer hundreds of leaks every year from accident or corrosion. Since 1990, these leaks have spilled over 110 million gallons. (New York Times, Sept. 9, 2011) Growing protests by environmental and community activists have centered around the transportation by pipeline of the heavy oil obtained from tar sands in Alberta, Canada.

Say NO to Keystone XL Pipeline

Tar sands oil, called diluted bitumen or dilbit, requires higher temperature and pressure to flow through pipes. On average this has led to 3.6 times more oil being spilled per mile than the national average for all pipelines. (SciAm.com, April 4). The Keystone I pipeline started operations in 2010 and has suffered 14 separate leaks. A giant spill occurred on March 31 in Arkansas. And in September, a pipeline run by Tesoro Logistics in North Dakota sprung a leak that went undetected for days. More than 865,000 gallons of oil spread over 7 acres of farmland in one of the largest spills in U.S. history.

Protests across the country are focused on whether President Barack Obama will approve the Keystone XL Pipeline, which would carry 830,000 barrels of tar sands oil each day. The pipeline’s aim is to transport “one of the dirtiest, most polluting forms of oil” (Natural Resources Defense Council) almost 1,700 miles from Canada to Texas for export.

The energy corporations’ safety failures have also become national news in West Virginia and North Carolina since the year began. A 10,000-gallon spill of a coal washing chemical contaminated the Elk River on Jan. 9. Some 300,000 people living in nine counties around Charleston, W.Va., could not drink or use tap water for weeks. On Feb. 6, a North Carolina facility owned by Duke Energy spilled up to 82,000 tons of coal ash slurry (a waste product of burning coal for power) into the Dan River. An estimated 27 million gallons of contaminated water also spilled. High levels of mercury, arsenic and lead were immediately detected in the river water, which is used to provide drinking water to communities downstream.

As public anger at the environmental threat by the profit-hungry energy industry mounts and protests spread, it appears that the courts and police intend to increase repression against the people, letting the corporate criminals continue their crimes against the environment.

For more information on the ­Michigan Coalition Against Tar Sands and the struggle to “Free the Felines,”
go to ­MichiganCATS.org.