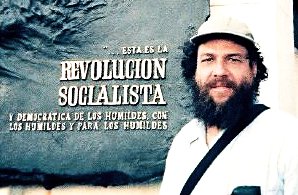 Miguel Cruz Santos, a tireless fighter for the working class and a defender of socialism, died on Feb. 6 in San Juan, Puerto Rico, at the early age of 56.

A memorial in his honor was held on Feb. 9 at the Ehret Funeral Home there where hundreds of activists, trade unionists and socialists praised his life’s work. In attendance were also his spouse, Oui Belissa, and son, Miguelito, and members of the Communist Party of Puerto Rico, of which Miguel was a founding member.

Miguel was a teacher who politically impacted thousands of students and workers throughout his life. Miguel had been a member of the earlier Communist Party when it dissolved in the 1980s and committed himself then to the party’s rebirth.

Above all, Miguel was a Leninist, giving classes in historical materialism and working in the teachers’ movement in Puerto Rico for the democratic participation of the workers. Recently, he militantly opposed the Puerto Rican government’s reduction of retirement benefits for teachers and use of this money to pay for the current capitalist debt crisis.

Miguel was an anti-imperialist who opposed all U.S. wars against oppressed countries during his lifetime. He was a defender of the Soviet Union and worked tirelessly to form alliances with revolutionaries in Dominican Republic, Cuba, Colombia, Nicaragua, El Salvador and Venezuela.

Miguel was a founding member of the Committee in Solidarity with Cuba, the Juan Rius Rivera Brigade, the Socialist Front, Communist Rebirth and the Vladimir Lenin School. Miguel and Oui Belissa also founded the anti-capitalist newspaper, Abayarde Rojo.

Miguel was a working-class fighter and internationalist. In recent times, he worked tirelessly to get the U.S. Navy out of the island of Vieques, opposed U.S. wars against Yugoslavia and Iraq, and was a delegate to the Trade Unionists Assembly, which launched the Peoples General Strike in 1998 to oppose the privatization of the Puerto Rico Telephone Co.

Miguel’s spirit of struggle and commitment to building socialism and communism were the cornerstones of his life. His comrades, fellow union activists and socialists at the memorial all praised his life’s work and committed themselves to continuing and advancing the struggle for a socialist future. Miguel Cruz Santos, presente!

The writer was a friend of Miguel Cruz Santos and attended his memorial.