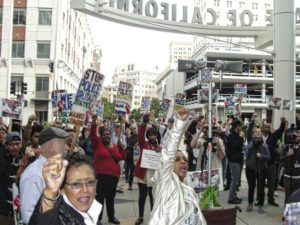 Oakland, Calif. — As part of the escalating campaign to demand that California Attorney General Kamala Harris prosecute killer cops, the Justice for Alan Blueford Coalition sponsored an hours-long militant protest and civil disobedience at the State Building in downtown Oakland on Feb. 13.

Protesters from throughout the Bay Area and beyond kicked off the protest with a loud and strong picket line, chanting “Killer cops have gotta go!” and other chants demanding that Harris prosecute killer cops. Protesters held handmade placards with the names of those killed by police.

Jeralynn Blueford opened the rally by describing how her son was ruthlessly killed by Oakland Police Department officer Miguel Masso on May 6, 2012. Then, family member after family member described in heart-wrenching detail how their loved ones — all working-class, and Black, Latino/a, Native, transgender and white — were killed by police officers. All described how the killing of their loved one by police is part of an epidemic of police terror in the U.S., aimed at oppressed communities in particular.

Former Black Panther Elaine Brown said the police operate as an occupying force on behalf of Wall Street and suggested that part of the “Prosecute Killer Cops” campaign should include protesting Harris at her speaking engagements and electoral campaign events.  Chris Finn, of American Transit Union Local 1555, spoke on behalf of labor. Josh Healey read his own letter to Harris, asking, “What if it was your child called Raheim or Gary or Andy Lopez?”

As part of the protest, seven labor and community activists conducted civil disobedience inside the building. They held a banner demanding that Harris prosecute Masso, the OPD officer who killed Alan Blueford. They also held signs, each representing a different victim of a police killing in California. Chanting with the crowd outside, they demanded that the attorney general, who has an office in the building, send a representative to hear the groups’ demands.

The protesters inside refused to leave the building until Harris, or her representative, came out. When the building was closed at 6 p.m., the state of California sent out about 30 officers in full riot gear from the Special Response Team.  According to one of the officers on the scene, they have been set up with special federal grant money to deal with protestors and “terrorists.”

The seven people conducting the civil disobedience were arrested, as was their legal observer and lawyer, Anne Weills, despite an explicit agreement with the police that she would be allowed to leave the building after witnessing all of the arrests.

The protesters arrested included Christina Arechiga, George Cammerota, Mollie Costello, Tova Fry, Forrest Schmidt, and Dave Welsh. They were taken to Santa Rita County Jail, where they were held for nine to 16 hours. The seven are being charged with refusal to disperse and have a hearing date on March 13 at 9 a.m.