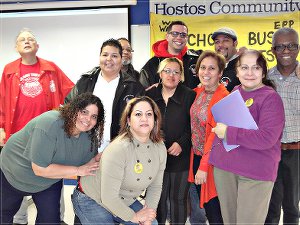 How can school bus riders and their allies win shorter routes and better conditions in a time of austerity?  On Feb. 8 at the Bronx’s historic Hostos Community College, legal, community and labor activists boosted this demand at an afternoon forum on “The Fight for School Busing Rights.”

Parents to Improve School Transportation (PIST) and the Hostos chapter of the Professional Staff Congress-City University of New York co-sponsored the forum.  Lizette Colón of the PSC quoted words of inspiration from 19th century Puerto Rican educator Eugenio María de Hostos and then told this reporter, “We have students [at Hostos] whose children ride the bus, who can be affected or have to drop out if the problems become too much.”

Speaking at the forum, 11-year-old Kwame listed ways that children in PIST can help, and presented a slideshow of Youth Art and Activism, worked on by Valerie Williams of District 75 (Citywide specialized programs) Community Education Council.

Norman Siegel, the well known Civil Rights lawyer who has represented school bus parents in talks with the NYC Department of Education, lit the crowd up with his recollections and advice for building a united movement to end what he called “a pattern and practice of violations” of the transportation rights of students with disabilities.  Examples of this pattern include diverting the bus 45 minutes out of its way twice a day to avoid tolls; routes involving too many stops to keep the ride under 90 minutes; and students dismissed before the school day ends to catch the bus.

Siegel said he would like to see a huge march in the spring to address this inequality.  Packets were given out containing written materials and a bilingual DVD of a bus route complaint workshop led by Siegel (See youtu.be/GW0l0qH_EGQ).

This writer went over PIST’s formation in 2010 and ongoing efforts such as the School Bus Bill of Rights campaign, inviting everyone to “be part of this movement, whether you have children on the bus or not.”

The large turnout after a week with two snowstorms, indeed reflected solidarity from many whose goals overlap those of school bus riders’ families, including a delegation from Amalgamated Transit Union Local 1181.  Representing the ATU 1181 Executive Board, Delegate Tomas Fret said, “We stand side by side with PIST.”  Fret also expressed appreciation for the Boston School Bus Union (United Steelworkers Local 8751).

Driver Nivia Medina pointed out union sisters of hers who had been unemployed from the end of the 2013 strike until recently, including a bus matron (attendant).  She estimated that due to the city’s low bidding without employee protection provisions, more than 1,000 drivers and 800 matrons remain on layoff today!

Milagros Cancel of Comité Timón de Madres de Educación Especial connected the group’s work on behalf of children in Puerto Rico and those who have migrated to the U.S. with the work of PIST.

Suzanne Peters, an advocate on the ARISE Coalition who started the Parent to Parent Special Needs Center at the Manhattan Jewish Community Center, and program chair Rosa María de la Torre of the Chelsea Coalition on Housing, related past struggles with busing for their respective sons, and their hopes for a better situation in the future.

Evonne Capers and Enrique Colón of Community Action for Safe Apartments (CASA)/New Settlement Apartments spoke on their organizing to get justice for tenants in Housing Court, and to restore the elevators at the nearby 149th Street and Grand Concourse subway station.  Ed Figueroa of SEIU Local 32-BJ Latino Caucus made connections between his work as a school cleaner and that of school bus drivers and matrons, both being undervalued despite their role in the education and safety of children.Leaders of Holding Up Great Sisters; District 12 (Bronx) Community Education Council; South Bronx Community Congress; Church of the Resurrection; Communication Workers Association 1180; the postal workers’ fight; the Peoples’ Power Assembly; Occu-Evolve; Military Women in Power; and the Citywide Council on English Language Learners were also present.

A number of mothers fighting to obtain appropriate services for their children learned of the meeting through flyers placed in area schools by sympathetic members of the teachers’ union.

Childcare was staffed by a special education paraprofessional and an occupational therapist, with toys and snacks donated by program participants.  CASA provided translation equipment; a PIST family who could not attend loaned a laptop for the slideshow.  A collection and raffle raised enough cash to cover the event expenses.  The meeting was filmed by Mike of People’s Video Network and will be edited by Johnnie Stevens of PIST.  For more information contact [email protected] or 347-504-3310.