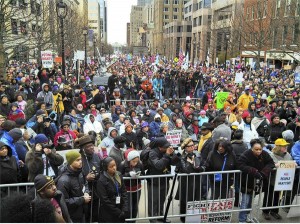 And come they did. Over 80,000 demonstrators took part in the Moral March on Raleigh, Historic Thousands on Jones Street (HKonJ) People’s Assembly on Feb. 8.

It was the largest gathering in the U.S. South since the Selma voting rights’ marches of the Civil Rights Movement in 1965. Expressing the current climate of fightback in North Carolina, the Moral Monday and HKonJ movement has sparked resistance across the South.

Civil Rights veterans and social justice activists by the busload flooded in from neighboring states to join in the historic march and rally. More than 100 buses brought people from across North Carolina. They were joined in the streets of Raleigh by groups from at least 30 other states.

The Rev. Dr. William J. Barber II, president of the North Carolina NAACP, played a central role, traveling extensively throughout North Carolina and other southern states to build momentum for the demonstration. The energy of participants reflects the global struggle against austerity and the multinational movement to put forward a People’s Agenda.

“When Blacks and progressive whites came together 144 years ago to begin the long journey out of the divisions of the Civil War, the good of the whole was their vision and dream for this state,” Barber told the crowd. “They knew then what we must know now; it’s the only way forward, it’s the better way. But in the house behind us, the new far-right, Tea Party-backed, ultra-conservative leadership of the General Assembly has attacked public education; they have assailed our voting rights, ignored the cause of the poor and unemployed; they have sought to divide us by race, income, region and sexual orientation. They are trying to sell off our environment to the highest bidder. All in the service of private greed and far-right ideology.”

The year 2014 marks the eighth year of the annual HKonJ mobilizations, spearheaded by the N.C. NAACP and undertaken by a broad coalition of more than 160 organizations. Unions, students and youth, immigrant rights, women’s, LGBTQ, civil rights, environmental, faith and many other organizations are united behind a 14-point People’s Agenda that has provided the basis for coordinated organizing and action for each year since the coalition’s formation.

The People’s Agenda raises many different issues, including the repeal of the Jim Crow ban on collective bargaining rights; full funding for education, including the state’s historically Black colleges and universities; health care for all; immigrant rights; abolition of the racist death penalty; and state redress and reparations for the racist 1898 Wilmington riot, the sterilization of women of color and the 1979 Greensboro massacre.

The HKonJ coalition held its first mobilization in February 2007 when Democrats controlled both houses of the state Legislature and the governor’s office.

The building of local people’s assemblies that can take up a program for action based around the 14-point agenda is projected as a central task of the united front effort. The constitution of this coalition and sustained action based on the People’s Agenda paved the way for the Moral Monday demonstrations, which drew thousands to Raleigh each week over the summer to protest the far-right agenda in the state Legislature, resulting in nearly 1,000 arrests.

It is the HKonJ coalition that since those demonstrations sustained the momentum leading to a steady rhythm of actions and organizing, giving rise to the Moral Monday/Forward Together movement.

Marchers began assembling en masse outside Raleigh’s Shaw University, one of the state’s historically Black colleges and universities and the birthplace of the Student Nonviolent Coordinating Committee. A morning rally that set the tone for the day was peppered with influences of liberation theology — a testament both to the long and active history of the Black church in previous Civil Rights movements and to the many people of all faiths who came with their congregations to participate in the march.

These groups have played an important role in the Moral Monday movement, which has in turn further politicized the low-wage workers’ struggle to embrace racial justice and women’s rights.

Larsene Taylor, vice president of UE Local 150, the Public Service Workers Union, spoke from the main stage: “We need a Workers’ Bill of Rights made into law that guarantees that the very basic human rights for all workers are met. Divided, we beg for a living wage, a safe work environment, and a force and a seat at the table. United, we bargain. We know that Civil Rights and labor rights go hand in hand; thus, the people’s fight is labor’s fight.”

Throughout the crowd and the various contingents were marchers wearing bright pink hats and carrying pink Planned Parenthood signs to protest attacks on women’s health and reproductive rights.

The youth and student contingent numbered in the thousands. It reflected the very active high school and college student organizing presence in the state and an upsurge of student involvement. Repressive attacks on the right of young people to vote, the school-to-prison pipeline, and years of deep cuts to public education are all spurring on youth to organize.

Youth across North Carolina played a pivotal role in the Moral Monday movement by being among the first to participate in civil disobedience actions and by raising the level of militancy. The youth and student contingent was joined by organizers from the Baltimore Algebra Project, the Florida Dream Defenders, N.C. Heroes Emerging Among Teens (HEAT), the N.C. Student Power Union, and youth from multiple Fight Imperialism, Stand Together (FIST) chapters.

Q Wideman, a leader of FIST in North Carolina, spoke at the main stage about why youth were motivated to march, citing the rate of murders by law enforcement and the rate of incarceration of Black and Brown youth. “I’m here today because Chuy Huerta is dead,” Wideman began, referencing the recent death of 17-year-old Latino youth Jesus “Chuy” Huerta while in custody of the Durham police. The killing has sparked outrage nationally.

The energy of the day was palpably hopeful, as the march wound from Shaw University toward the State Capitol. Youth-led chants called out the role of the racist, right-wing capitalist Art Pope. The chant for “Jobs and education, not war and Incarceration” mingled with music played over the loudspeakers that got protesters dancing.

Since the march, the HKonJ coalition and other groups have announced a number of initiatives to continue to build the growing fightback that has been awakened.

In 1964, thousands from across the U.S. convened in southern states to assist the struggle of African Americans to acquire the right to vote, to organize workers and to give aid to the Civil Rights and Black Freedom struggle. This year, to mark the 50th anniversary of this historic mobilization, a broad coalition of groups is making plans to pick up this banner and bring organizers to southern states to contribute to the struggles on the ground here.

Workers World Party has announced plans to convene a southern socialism conference in Durham the weekend of March 28-30. It will provide a revolutionary analysis of the current period, the growing fightback, and the tasks needed to build peoples’ power that can take on the racist capitalist system and build socialism.

The tremendous HKonJ demonstration held Feb. 8 is a reflection of the growing consciousness of the working class in this period and the willingness to engage in a mass fightback against the right-wing and other reactionary forces. It is an encouraging development for the struggle in the U.S. South and for the movement as a whole.