By Terri Kay and Judy Greenspan 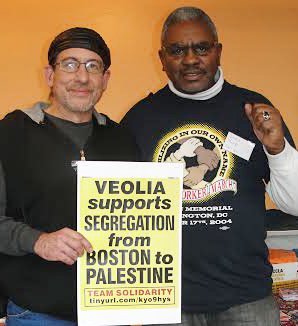 San Francisco — An international conference here on Feb. 8 brought together workers, community members and activists with one common enemy: Veolia. Besides the 100 attendees, many more joined by Skype and watched globally via live streaming.

“In Boston we call them Veo-liar!” said Steve Gillis, vice president of USW Local 8751, and one of the four fired Boston school bus drivers. He described how when Veolia took over the school bus contract in June, “it took away the time clocks and union participation in training” along with the drivers’ records of time spent on required tasks. The union filed 18 unfair labor practice charges with the National Labor Relations Board and over 175 grievances within the first few months of Veolia’s takeover.

Gillis said the majority Haitian, Cape Verdean and Vietnamese drivers were experienced in dealing with the French company, “facing off the police 20 times in the first two months.” On Oct. 7, when Veolia demanded that all the drivers fill out new hire applications, “the drivers in all the yards blocked the doors to the managers’ offices and tore up all the applications,” said Gillis.

Veolia management refused a meeting with the drivers’ union leaders on Oct. 8 and ordered all workers off the property “under threat of arrest and locked the gates.” A lockout was in effect.

He called the Solidarity Day 2 march and rally in Boston on Feb. 1, “a turn around. The new mayor of Boston had to issue a statement saying that ‘the issue must be resolved, for the sake of the children.’”

Hugh Lanning, former general secretary of the Public and Commercial Services Union in Britain and chair of the Palestine Solidarity Committee, said via Skype, “Veolia has been a focus because of their complicity with the occupation of Palestine.” He added, “In [Britain], since the Israeli bombardment of Gaza, the public has been moving against Israel.”

Omar Barghouti, co-founder of the BDS movement in Palestine, said via Skype: “Our very first supporters were trade unionists. After Israel’s attack on Gaza and the Freedom Flotilla in 2010, Swedish dockworkers refused to offload Israeli cargo from ships.”

Barghouti said that over the past five years, the BDS campaign against Veolia has cost that company $20 billion. “Our greatest victories against Veolia have been cross movement efforts to tie international human rights violations with local negative impacts like privatizing the water system.”

Gillis expressed the solidarity of the Boston bus drivers with the BDS movement and its fight to get all companies to divest from Veolia.

Charles Smith talked about the struggle in Richmond, Calif., against Veolia’s takeover of the wastewater treatment system. Since Veolia landed the contract, water rates have risen astronomically. Faced with an old water treatment plant, Veolia is making “the working-class population of Richmond pay” for building a new one.

Nancy Murray of the Boston Coalition for Palestinian Rights spoke on the successful campaign to stop Veolia’s contract to run the local mass transit system. The BDS campaign focused on Veolia’s support for Israel and its anti-union, anti-worker record. On Jan. 8, Veolia lost the contract.

Tony Yovo, a West African immigrant worker from Baltimore’s SuperShuttle service, spoke against Veolia’s takeover of that company, stating: “I am a victim of Veolia. I was forced into slavery in the 21st century.” Veolia owns SuperShuttle companies around the country.

Erin Diaz, director of the Public Water Works Campaign in Boston, said her group exposed Veolia’s role in privatizing and “undermining people’s access to water” in St. Louis and around the world. The 11-month campaign to regain public control of St. Louis’s water access was won with tremendous public support.