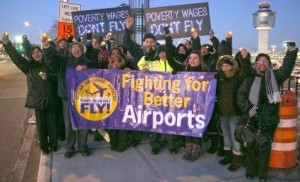 It was a “big win” according to the Service Employees union, Local 32BJ, the union trying to organize airport service workers at the three New Jersey/New York airports: Kennedy, LaGuardia and Newark International. The three airports are owned by the Port Authority of New York and New Jersey.

On Jan. 20, 32BJ members and supporters marched on LaGuardia Airport, blocked the main access road and sat down. The cops arrested 30 people.

Eight days later, 32BJ received a letter from the PA proposing that Martin Luther King Jr. Day be a paid holiday for airport contract workers; a phased wage increase to $10.10 an hour; and consultations over the next 90 days among the airlines, contractors and 32BJ to hammer out a three- to five-year plan, with the goal of delivering fair wages and benefits to airport workers.

The 4,000 airport workers at Newark weren’t covered. While the PA presents itself as a single agency, it really consists of two independent operations — one in New York and the other in New Jersey.

Christie, even though weakened by the Bridgegate scandal and reports of his political bullying, still has dreams of running for president. Cuomo, whose presidential aspirations are not so open, still wanted to do his bit in building a Democratic wedge issue. He also sought to placate New York’s labor movement, which generally did not support him in his last run for governor.

Gramiccioni released a statement saying that Foye’s “directive raises complex labor, business and legal issues that our airlines, their business partners and employees are facing, and we need to consider the significant financial and operational impacts at our airports.”

Speaking plainly, she could have just said that paying workers more will hurt somebody’s bottom line and there is a dispute over whose will be hit. There are airport service workers at Newark who don’t get the state minimum wage. How complicated would that be to fix?

The airlines are saying they can’t tell their contractors what to do — that it would violate anti-trust laws.

All of this squirming and posturing reflects the growing anger, militancy and organization of airport service workers.

United NY, which played a big role in organizing the Jan. 20 protest, held a conference call on Jan. 31 to honor the workers who participated in that action and to announce the creation of a watchdog committee to guarantee that the PA keeps its promises. It also intends to hold a broader “Low-wage Workers Coalition” meeting on Feb. 14.