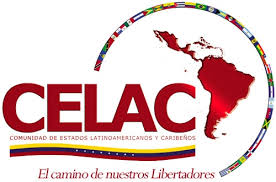 The development of countries and regions is an ongoing dialectical process, just as the peoples’ movements throughout the world are. In the Latin American and Caribbean area, the peoples’ participation in political life, with a renewed involvement of sectors of the population who had been excluded for decades, has brought about significant positive changes in their governments. In turn, many of these governments for the first time in history are looking toward each other for trade and associations, instead of looking only toward the United States and Europe.

One such association is the Community of Latin American and Caribbean States. A significant development, CELAC has openly challenged the 200-year-old Monroe Doctrine of U.S. intervention in and domination of the region. CELAC is a block of 33 nations that purposely excludes the USA and Canada. Puerto Rico is also absent because of its condition as a colony of the USA.

CELAC’s goal is to allow its members to work together for the benefit of their peoples, to strengthen their relationship as a regional block toward creating a more beneficial international presence and to improve trade. Founded in 2011, due to the inspiration of that giant of Bolivarian regional integration, Hugo Chávez, CELAC held its third summit on Jan. 28-29 in Havana.

Heads of state represented 29 of all 33 countries present. Some countries, like Costa Rica, had not sent a head of state to Cuba since 1961, before Cuba was expelled from the Organization of American States, a U.S.-dominated organization. Invited guests were the secretary generals of the United Nations, Ban Ki Moon, and of the OAS, José Miguel Insulza.

The countries’ foreign ministers met a day earlier to draft the “Havana Statement” that would later be debated by the presidents. All CELAC’s resolutions must be unanimous. Considering the vast political differences among the governments, which encompass the complete political spectrum from socialist to far-right administrations, reaching a consensus is a phenomenal feat.

At the end of the summit, a 16-page statement with 83 points was issued; it included a significant point: the declaration of the region as a peace zone and a zone free of nuclear weapons. Bearing in mind that U.S. imperialism has many military bases in the region with the possibility of storing nuclear weapons, it will be important to see how this resolution develops.

That Cuba hosted the summit was an important international development, though one either ignored or dismissed in the U.S. corporate media. During 2013, Cuba, through its President Raúl Castro, held CELAC’s temporary presidency — an office rotated annually among member countries — so that meant Cuba would host the summit.

Latin American and Caribbean countries have unanimously condemned the U.S. blockade of Cuba and Cuba’s forced exclusion from U.S.-dominated international forums such as the OAS. Thus the presence of this year’s summit and 29 heads of state in Cuba was a blow to U.S. imperialism.

Many sources reported that the State Department tried but failed to convince several countries to meet with the Cuban right-wing opposition. Instead, many met with Cuban officials. Ban Ki Moon, for example, met with Mariela Castro, head of the National Center for Sexual Education, and praised Cuba’s work on behalf of ending violence against women.

Many CELAC members have embraced Cuba and consistently shown solidarity with the revolutionary nation, while defying U.S. policies aimed at isolating Cuba.

A major development toward breaking the U.S. blockade is Brazil’s financing and construction of improvements to Cuba’s Port of Mariel, 28 miles west of Havana. Brazilian President Dilma Rouseff and Cuban President Raúl Castro inaugurated the first phase of the project on Jan. 27.

Brazil has been increasing trade with Cuba, setting up joint projects in sugar production and in the biopharmaceutical sector. Cuba, in turn, provides Brazil with 5,000 physicians. Brazil is a thoroughly capitalist country with a powerful business sector. Nevertheless, the Mariel “Megaport” seems to be economically advantageous for both countries. It will also help Cuba in its effort to expand interregional and international trade, so damaged by the criminal U.S. blockade.

Brazil’s government banks are providing about $1 billion to finance the building of the Port of Mariel’s necessary infrastructure to accommodate the new post-Panamax super-container ships that the current Havana port is unable to receive. The project will be part of a “Special Zone for Mariel Development” that includes improvements to sea and land transport. Owned by the Cuban Almacenes Universales S.A., the port will be administered by the International Singapore Port Authority, the major port operator in the world.

Puerto Rico’s independence: a task for the CELAC

Another significant development was the debate about Puerto Rico’s independence. In response to Puerto Rican independence activists’ plea to include the island in CELAC — the music group Calle 13 brought a request to the prior summit — Venezuela’s President Nicolás Maduro vowed to make it possible for Puerto Rico to have a voice in CELAC. Maduro even hosted a magnificent “Forum for a Free and Independent Puerto Rico” on Jan. 22 in Caracas, where he invited and brought several Puerto Rican independence activists from the island. The event was transmitted live through Telesur.

Since Puerto Rico is not yet a sovereign country, Boricua activists attended the summit as observers. The final Havana Declaration included three points about Puerto Rico, making the task of ending the island’s colonial status a priority for CELAC. The points reaffirmed the Latin American and Caribbean character of the island; pledged to raise its independence at international forums, including the U.N. Decolonization Sessions next summer in New York; and declared the CELAC region a zone free of colonialism.

Four countries — Cuba, Costa Rica, Ecuador, and Trinidad and Tobago — were assigned the task of following-up the necessary steps to make the independence of Puerto Rico a reality.

The importance that CELAC’s actions have for the independence movement in Puerto Rico can’t be underscored enough. This movement has been condemned for decades by the repressive policies of the United States. The island is in a particularly difficult situation now due to the serious economic crisis, and pro-independence activists will benefit greatly from solidarity from the international community.

Among other significant outcomes of the summit were establishing a China-CELAC forum to strengthen the region’s trade with that Asian country and support for peace negotiations between the FARC-EP (Revolutionary Armed Forces of Columbia-People’s Army) and the Colombian government.